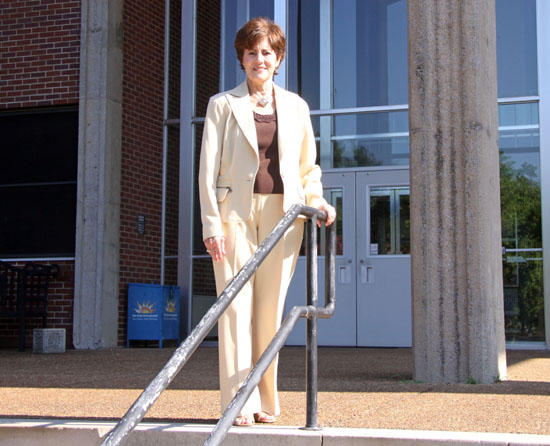 Frances Rich stands in front of Cope Administration Building on the MTSU, where she spent most of her 48 career working at the university.
Frances Rich always knew retirement would be in her future but as much as the Woodbury native loved working at MTSU, retiring rarely occupied her thoughts and generally was not something she discussed or considered.

Rich began working at MTSU in the summer of 1960, just months after graduating from Woodbury Central High School. She was reliable and proved to be a rock for so many, for so long. Rich gave MTSU 48 years of loyal service but when students begin fall semester this week, a big piece of MTSU no longer will be there.

After almost half of a century working on the same campus, Rich retired in July when university buyouts for employees became optional.

"Every person knows that somewhere out there, in time, they have to retire," said Rich. "I had no deadline and frankly I had not thought about it but since the buyout came available and I could take advantage of it, I did. The timing was good."

Her most recent responsibility was serving in President Sidney McPhee's office, and though Rich worked for numerous vice presidents and presidents, it was students and families she enjoyed helping most.

Some people are stunned Rich, 68, was able to work at the same place for 48 years. The charismatic and charming Rich rarely considered what she did work.

"I enjoyed it tremendously," Rich said. "I love helping people and when I saw a parent that was upset or frustrated then I wanted to hopefully point them in the right direction. I could always generally find someone to work with them on their problem. It was never work to me. It was something I really enjoyed. I wanted it to be done as perfectly as possible. Whatever I was asked to do I worked hard to do it the best I could."

Rich left a lasting impression, not only with her peers and former presidents, but with the people who really mattered most ... the students.

Many have kept in touch through the years.

Some, like Pat McAfee, have formed lasting friendships. McAfee began attending MTSU in August, 1976 and graduated May, 1980. He attended Rich's retirement reception in July.

"Frances is the epitome of professionalism," McAfee said. "She always looked perfect and she always had an answer. She was on top of everything. If you needed to know something you knew you would call Frances and she could help. If you needed a friend, she was there. She has always been such a good friend to me and my family. Our friendship started then, when I was in college, and has lasted more than 30 years.

"Frances is a top-notch person professionally and personally. That she has given all these years is just amazing. She doesn't look a day older than the day I met here and she's been there 40-plus years. It's where she always has been and that's just the way it is supposed to be. I can't imagine her not being there."

Kim Edgar, executive assistant to the president, said MTSU lost more than a loyal, devoted employee when Rich resigned. It also lost a historian of sorts.

"Her knowledge of this institution, of its history, and of its people is unmatched," Edgar said. "Frances knows every person, every department and every policy, and even every phone number!

"One of the most special things about Frances is what most people on campus don't see but is one of the most important things she does. She cares about our students. I know that she has seen thousands of students during her years here, and of those thousands she has personally assisted hundreds of them in whatever they may need. She has been a great inspiration to me.

"Not many people these days are happy to get up and come to work after 40-plus years," Edgar continued. "She always has a smile on her face and is ready to take on the day with a great attitude. Frances is the kind of person that everyone wants in their office."
Rich may have a period of adjustment early in retirement, especially after following the same routine for such a long time; however, the change will be equally taxing for her sister, Betty Smithson, who lives down the street from Frances in Woodbury. Smithson works for current vice president of student affairs Debra Sells. Smithson, 63, and Rich commuted from Woodbury to the MTSU campus each working day for the last 45 years.

Martha Turner, 72, is the eldest of the three sisters and was the first director of placement at MTSU. She retired from the university after 43 years service in 2007. In all, the sisters have combined to work 138 years for the university.

"It is very different going to work without her after so many years of riding together," Smithson said. "This was our special time to chat about the day or other things we needed to do. I knew she would be retiring in a year or two but I wasn't expecting it this year. I will miss knowing that one or both of my sisters is not on campus since we have all been at MTSU. Although we rarely saw each other during the day, it was a good feeling to know they were close by."

The sisters were close growing up in Woodbury and working at Roach Dry Goods on the downtown square, a store owned and operated by their mother. They remained close during devout service to MTSU.

"(MTSU) was such a wonderful place to be," Rich said. "I never gave any thought to leaving or doing anything else. We were happy there, Betty, Martha and I. We never worked together but we knew one another was there and that was comforting. We could enjoy the same things."

Rich worked in McPhee's office the last eight years and the president said her contributions to MTSU are plentiful.

"I would like to thank (Rich) for the many years of service to this university," McPhee said. "Frances has served this university for (48) years and we are all grateful for her outstanding dedication."

Though she is officially retired from her position at MTSU, Rich will be volunteering and working on special projects and committees when asked or needed.

Hard to imagine her wanting to do anything other than serving MTSU ... even in her free time.