Wamp Says Washington Is Out Of Whack 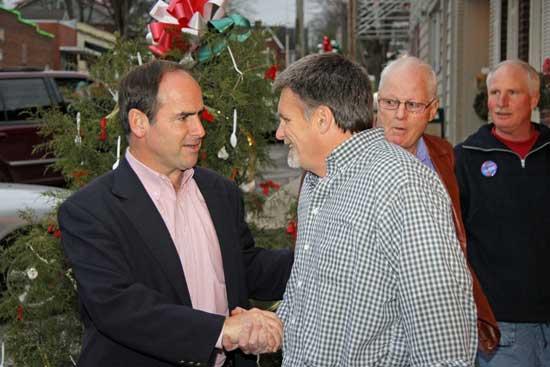 Gubernatorial candidate Zach Wamp, left, is greeted by Joe's Place owner Randy Barrett prior to his speaking their Saturday.
Zach Wamp wants to get the federal government off the backs of Tennesseans, and is giving up the elected position he already holds to try and put himself in position to do so.

The U.S. Congressman, who has represented Tennessee's 3rd District for the past 15 years, has decided not to seek reelection to Congress so that he can instead run to become the state's next governor.

Wamp came to Woodbury for the first time Saturday to tell local residents about his vision for the future of Tennessee, his stance on key issues facing the state and country, and to listen to their concerns.

To say that Wamp, a Republican, is upset with what has been taking place in Washington both during the last few years of GOP leadership and since the start of the current administration, would be an understatement.

"I would not say I am frustrated," Wamp said. "I would call it more a deep anger."

The source of Wamp's angst, he said, is his belief that the Obama Administration and Democratic-controlled Congress is leading America in the wrong direction.

"The (federal) government is out of whack. It is exerting way too much oversight over the states. The 10th Amendment says that everything that is not clearly defined in the Constitution as the responsibility of the federal government belongs to the states and the people."

Wamp said states have the ability to chart their own course, to make their own laws, to push the federal government back out.

"That is not happening near enough," he added. "I will not just be a strong governor on this 10th Amendment issue. Whether it's guns, or abortion, or whatever the issues are, our states have autonomy. We just are not claiming that, and it's a bad trend that this federal government is a nanny state, everybody gets treated the same, especially with the regime that is in Washington now.

"I will not just be a strong governor on this (state's rights), I will be a leader among governors, because I know we need to do this for the sake of history and posterity. The states need to buck up and kick back against this federal government so that we can guarantee the people of our state their liberty and their freedom and their future."

Wamp said that regardless of what happens in California or New Jersey or some other state, if they want to be reckless and irresponsible and not have a balanced budget, don't force Tennessee to do the same. "Don't cause us to pay their bills. Don't come down here with executive orders and tell us what we have to do."

Wamp acknowledged that he was taking a risk by leaving Congress and throwing his hat into the governor's race.

"I'm laying it all on the line. I've had a good run in Congress, but I'm one of these people that believes that if you love something, be able to let it go," Wamp said.

"I want to lead this state, even during these difficult times, to even better days. I have the same motive in my heart that Abraham Lincoln had. He was motivated always to using his brief moment in time known as his life to the maximum benefit of the world around him. He wasn't motivated by power or money or any of the things that sometimes motivate people in public life. He was motivated by impact, and that is truly what I am trying to do, to use this brief moment in time known as my life to help our state become even better."

Wamp said he is concerned that future generations will suffer because of some of the events taking place today.

"I believe we need desperately to turn this country around or we are going to be the first generation ever to leave the place in worse shape than what we found it," he said. "A functional, free society has four cornerstones — the family, the church, the free enterprise system and the government. Every one of them should have a defined role, and one shouldn't encroach upon the other. The government can't be the family. The government can't be the church, and the government can't over-regulate and tax and litigate the free enterprise system, and right now it is out-of-whack and I want to show the country and Tennessee we're going to do this right.

"You can almost feel freedom slipping through your fingers every week in Washington. These left wingers that think the government can solve all your problems, they're running the table as fast as you can, and we need to stand against that."

For more information about Wamp's vision for Tennessee, visit ZachWamp.com.