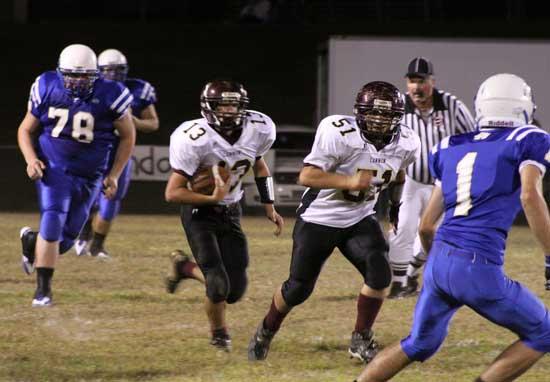 Receiver Justin Weaver follows the block of Jared Melton for a 25-yard gain. Weaver had a career-best five receptions for 55 yards and an interception against Livingston Academy.
LIVINGSTON - Though the final score did not reflect it, Cannon County's football team took a giant step forward in a District 7-AA road encounter at playoff hopeful Livingston Academy Friday.

The Lions put forth their most complete all-around game of the season and hung with the Wildcats (4-3, 2-1) before finally succumbing in the fourth quarter during a 40-13 setback.

Senior tailback Gabe Walkup continued his accession toward the 1,000-yard rushing milestone with a dominating ground performance, chalking up a career-best 183 yards on 35 carries and a touchdown to lead the offense. Walkup, who is averaging more than 100 yards per game, pushed his rushing total to 722 yards for the season behind a strong showing from his offensive line.

"The line did a great job opening holes and creating running room," Walkup said. "We were able to move the ball consistently and keep the chains moving in the first half and that gave us a chance."

Senior quarterback Heath Simons added a touchdown run in the second quarter to pull the Lions (0-7, 0-3) to within 20-13 late in the first half. He teamed with junior receiver Justin Weaver for big gains to keep several drives alive in the first half. Weaver finished with a career-high five receptions for 55 yards.

Unfortunately, for the Lions, their lack of depth, injuries and overall youth, finally caught up to them in the second half as the Wildcats eventually wore them down and pulled away.

"It's the best we have played," Cannon County Head Coach Joel Schrenk said. "We played real well for 36 minutes and in the fourth quarter we just didn't overcome some adversity that came our way. We didn't get the win but we did improve tonight."

Walkup almost reached the 100-yard mark in the first quarter, churning out massive gains on his way to 98 yards on 11 carries. He capped the Lions first scoring drive with a 14-yard run with 1:22 remaining as they pulled to within 13-7. Weaver's 25-yard reception from Simons was one of the key plays during the impressive scoring drive.

"Gabe played extremely hard and I wish we could rest him but he played every snap on defense and special teams, in addition to what he did on offense," Schrenk said. "He gives you everything he has every time. The offensive line did some good things to open holes for him early. Justin Weaver gave us as solid of a night as we've had out of a receiver this year. There may have been some games when a receiver had more yards or catches but (Weaver) did a good job blocking, he ran precise routes and he caught the football well. He was solid tonight."
Livingston led 20-7 when the Lions put together another long, sustained drive that culminated with Simons' 3-yard keeper with 1:51 remaining before halftime. The extra point attempt failed but the Lions had pulled to within 20-13. Weaver denied the Wildcats on their next possession when he hauled in his first career interception.

Cannon County carried the momentum into the half and believed its first win of the season may have been on the horizon, but Livingston Academy was able to wear the Lions down in the second half with a deep roster that allowed it to rotate fresh players onto the field throughout. That, coupled with Cannon County playing a wealth of young players and without some of its key players due to injury, proved too much to overcome.

On the bright side, those young pups continued to flourish as they gained extensive action to provide a silver lining and a glimpse of positives for the future. Freshman Dalton Ryan turned in a stellar effort with seven solo tackles at defensive end. Freshmen B.J. Daniel and Hawk Love played every snap on defense and Dillion Jackson, also a freshman, was on the field a majority of the night. Love also was utilized offensively and never exited the field during the game.

"I continue to see positive things from those young guys," Schrenk said. "Dalton Ryan became a varsity football player tonight. He was strong out there. We are just playing the young ones more and they are getting better. Sometimes we have to go through things that are absolutely necessary but they are highly beneficial. I think we will see in the future that we are going through some things right now that are necessary but it will benefit us down the road."

Cannon County will play host to Scott County for Homecoming Friday at 7 p.m.