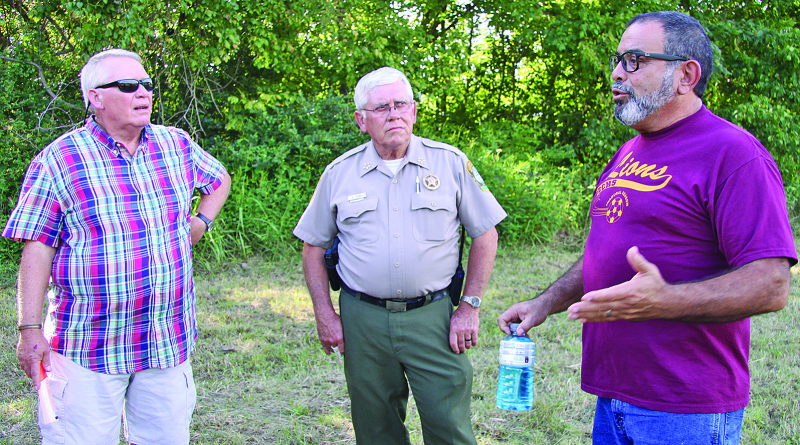 Planning is underway by members of the Cannon County Industrial Development Board and volunteers to add at least two soccer fields adjacent to Dillon Park.

The site is located on property owned by the Cannon County Industrial Development Board, but cannot be used for construction because it is in a flood zone, explained IDB chairman Corey Davenport.

"We've got to start from zero," explained soccer enthusiast Gulliermo Norod, who began the push for additional soccer fields in Woodbury. His daughter, Raquel, is a senior and goalie for the CCHS Soccer Team. Norod helps coach the CCHS team.

"We're talking about building for the future," he explained. "We should build this for upcoming players, like my grandchildren and generations to come."

"We have space for two regular sized soccer fields," said County Commissioner Richie Hunter, "but we will also have enough space for smaller fields for youngsters."

Development of the site could also enable the expansion of the running track located next door into a cross-country track, Hunter said. The cross-country team at Cannon County High School is excellent with a great winning record. Expanding the track could allow CCHS to host cross-country events in Woodbury.

The planning is the result of informal meeting held a few days ago.

"Three days later everybody is for it," Norod said. "It's a good idea all the way around."

The property in question is located on Alexander Drive across from Crane Interiors and adjacent to Dillon Park. Stones River runs along the back of the site.

Last Wednesday (August 24), interested parties met at the site along with Thomas Laird, supervisor of athletics for the Murfreesboro Parks and Recreation Department. Laird provided the group with ideas on how to proceed with the project.

"First, you have to fill the holes," Laird grinned, "and then get a good base on it."

The "base" Laird was referring to is grass, possibly Bermuda, to replace the weeds and Johnson grass currently growing on the field. The most expensive part of the project would be the actual soccer goals, he explained.

Norod suggested the goals could be built by volunteers with the only cost being the nets.

Sheriff Darrell Young said inmates could provide much of the labor beginning with the cleaning out of the brush between the new soccer fields and the existing Dillon Park. That's the first step and work can begin as soon as authority is granted.