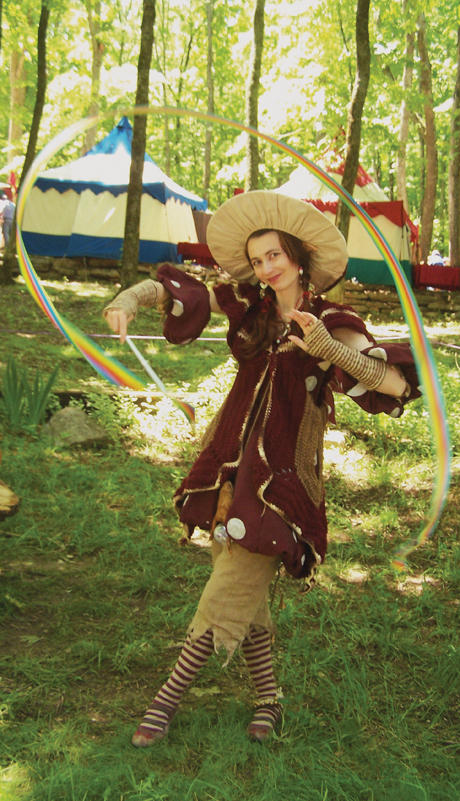 By CONNIE ESH/ Special to the Courier

Did you ever wish you could meet Robin Hood, or Elizabeth I? Well, you can. Just head on over to Triune, 10 miles west of Murfreesboro on Highway 96, and catch the Tennessee Renaissance Festival on any of the remaining weekends in May.

Don't forget to bring the whole family. The kids will get a thrill from watching the actual, honest-to-goodness jousting by knights in shining armor, and from riding a real one-hump camel.

They also will love dressing up like little lords and ladies, fairies and pirates - and parents attending the festival seem to like dressing up Renaissance-style, too. Every other festival-goer on any typical day might be seen in a long gown and corset, robe and knee britches, or other Renaissance "garb," mingling with the crowds otherwise dressed in jeans and other modern clothes.

There's even a special arts and crafts tent for kids. But on Sunday, 6-year-old Kaitlyn Oliver, said her favorite attraction was DaVinci's Hurlinator.

Kaitlyn, who attends Christiana Elementary in southern Rutherford County when she isn't sampling what it was like to live in England, A.D. 1565, rode the camel Sunday too, but it was the Hurlinator that really struck her fancy, she said.

The Hurlinator resembles a carnival ride with four seats spinning in circles, except its motor is human, since the Renaissance took place before the age of engines. Everyone riding it pumps it to make it go faster and faster around.

Kaitlyn rode it with three generations of her family, including her 65-year-old grandfather. "It was fun, and I didn't even puke," she said proudly.

Theresa Laflamme, who came with her daughters Tessa, 9, and Clara, 5, from Springfield, Tenn., couldn't agree more. "This is our first year. We're having a blast. It's great, much better than we thought it would be. We'll be back, probably next weekend," she said, just after Queen Elizabeth knighted the girls.

The camel rides are right across the way from the jousting, which is next to the Pirates Cove. There are lots of things going on all the time, with several special activities just for kids.

At the children's arts and crafts area, parents can take their youngsters for a relaxing rest stop. "Some kids react badly to the word 'nap,' but 'Let's go make puppets' can get a better response," says an elf calling herself Morning Glory and supervising the activities in the tent. Parents and children can take a needed rest break and have fun at the same time, too.

The juggler, Paolo Garbanzo, comes from Sicily to entertain. He says this is his seventh year in a row. He also shares a knife-throwing act with Gacomo the Jester.

The bagpiper, Charlie Rafferty, droning an old Scots tune on the corner across from the booth where turkey legs were vended, comes from Taos, "Nuevo Mexico," he says. His music was part of Celtic Weekend at the festival, and while Rafferty says this is his first year here, he hopes it won't be his last.

And the fairies come from everywhere, and dance through the woods every weekend, acting out their own versions of fairy tales, and sprinkling magic dust on small children.

Gypsy jewelry, including lots of bling, is sold by Anna Lerman, a modern-day gypsy herself. She says she lives in a camper traveling from festival to festival selling her wares. "I was born on a freeway in New Jersey," she said. "But I'm not from New Jersey. My father owned a circus and we were traveling to a show when I was born."

Her own daughter was born in Murfreesboro while her family was working at the Tennessee Renaissance Festival. "We've been here every year from the very first one 28 years ago," Lerman adds.

Of course, turkey legs aren't the only food available at the festival. There are also frozen bananas dipped in chocolate, roast ear corn, chocolate-covered strawberries on a stick, and much more. Don't forget the old-fashioned lemonade if you're thirsty. Do bring cash, because outside food and drink are not permitted, and pets also are taboo.

The festival is family-oriented, but a few of its shows such as Axel the Sot's comedy routine are for adult audiences only. These events are clearly marked on the program given out at the front gate, so parents will know which shows are okay for kids.

But one of the best parts of the festival is its costumed patrons and actors, who roam the paths among the many booths, shows, contests and rides.

During the week, Nashville's Julian Heath is an Ortho pest controller. But on the weekends, he's a Renaissance man, attending Renaissance fairs all over the country in old-time wear.

On Sunday, he sported a dashing black hat with a long white plume, looking like one of the Three Musketeers - but he said, "I'm supposed to be a pirate. I've got four different sets of garb, and this is the one I grabbed to wear today."

Heath and his wife Brenda, who supplies all his attire, have traveled to such locales as Bristol, Wis., Ypsilanti, Mich., and Atlanta to experience those cities' versions of days of yore. In Tennessee, Heath says "this is my fourth year" attending, and he always has a good time because, he says, the festival changes him for the better.

"Normally I'm not this outgoing or outspoken, but once I dress up, I'm a totally different person," Heath claims with a grin.

"I've been here every year since we moved up here, five years ago," says Pamela Moore of Murfreesboro, sporting an ornate tiara and elf-like ear extenders that she can wiggle - with her ears. "I've been going to fairs for over 16 years."

Also wriggling around on her shoulder is a little furry red, mechanical gargoyle, or as Moore calls it, a "cat-goyle - if you look, he's got a very feline feel." Moore's ears, by the way, are among the novelties and more complicated crafts that can be bought at the festival's booths.

Christine Harris drove in from Memphis, very early Sunday morning, with her children who wanted to treat her for Mother's Day,