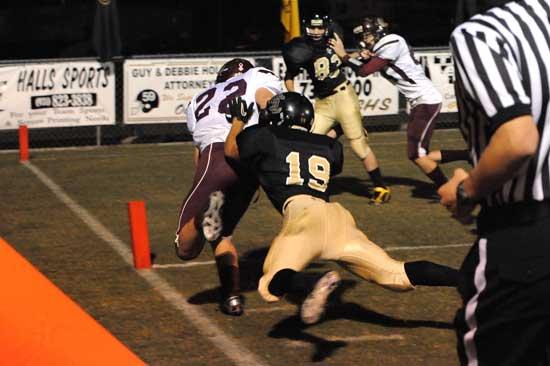 Justin Tobin (#22) sets up the touchdown with a big gain. (JOEL FRANKLIN photos)
CARTHAGE - The potential for a one-sided game was clear when No. 2-ranked Smith County welcomed winless Cannon County Friday (Oct. 14).

The Lions were unable to slow the charging Owls, who remained undefeated in eight games, with a dominating 61-8 thrashing of Cannon County (0-9).

"I just wish we (would) compete a little harder and that's my fault that we don't," Cannon County Head Coach Joel Schrenk said. "Smith County is really good and we knew that coming in. They have a very strong offensive line and their skill players are really good."

Cannon County offered no resistance as any hopes of what would have been a shocking upset never developed. Smith County scored on its first seven possessions and also had a 97-yard interception return for a score to storm out to a 55-0 first-half lead. The Owls would tack on one more score before the half to carry a 61-0 lead into intermission.

Trailing 14-0, Cannon County had a rare opportunity when Tobin hauled in a 32-yard pass from Jordan and raced to the 4. The defense bit on the double reverse pass and Tobin was wide open; however, Jordan's pass was not sharp and Tobin was run down. One play later Jordan's pass was picked off and returned 97 yards for a touchdown to give Smith County a 21-0 lead.

It only got worse.

Smith County stretched the lead to 42-0 by the end of the first quarter and Schrenk gathered the ranks for a quick meeting.

"During pregame we talked about one play at a time, one snap at a time, and not worrying about anything other than going as hard as you can for eight seconds," Schrenk said. "I called them together and reminded them of what they said and what we committed to do. I thought it was better after that."

Smith County inserted some of its back-ups midway through the second quarter and played primarily all reserves in the second half. Cannon County was able to keep the Owls off of the scoreboard, while moving the ball more consistently and getting its one score.

"I'm glad we were able to come to life a little bit, but we have to take it for what it is," Schrenk said.

Cannon County will have its bye this week before closing the season against Upperman at home Oct. 28. It will be Senior Night as Sean Owen, Thomas Stone and Jeremy Weaver will be recognized in a pregame ceremony.