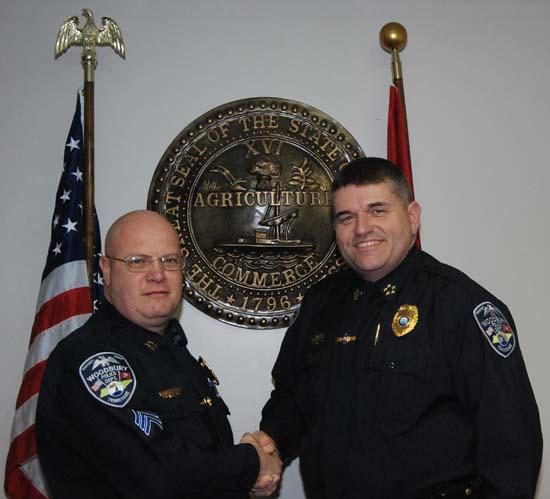 Assistant Chief Mooneyham has been with the Woodbury Police Department for 19 ½ years. He was promoted to Sergeant in 2007.

“With Assistant Chief Mooneyham’s experience and dedication to this department, I am fully confident that he will be an asset and help lead us in the years to come,” Police Chief Tony Burnett said.

“He has observed us go through many challenges at the department, which adds to my confidence in his ability. We have grown tremendously as a department over the last six years and we intend to stay on the leading edge of law enforcement.”

Asst. Chief Mooneyham will be second in command and will also assist Chief Burnett in administrative duties and the everyday supervision of the Woodbury Police Department.

“In accepting this promotion, I would like to thank Chief Tony Burnett for his confidence in me to stand by him in leading the Woodbury Police Department,” Asst. Chief Mooneyham said.

“I would also like to thank my wife Diane for standing by me and encouraging me to be the best that I can be. It is both an honor and a privilege to be a member of such an outstanding department and to serve with such an outstanding group of men. I look forward to serving beside Chief Burnett and serving the citizens of the Town of Woodbury.”