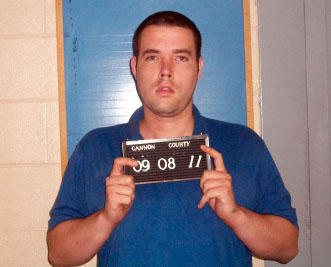 A Murfreeboro man who apparently didn’t know where is was going ended up in the Cannon County Jail on Sept. 8.

Joseph William Kendall, 2025 S. Church St., Apt. 104, Murfreesboro, was charged with DUI 3rd offense, driving on a revoked license (for DUI) and violation of the implied consent law on Sept. 8.

Cannon County Sheriff’s Deputy Moss was dispatched at approximately 11:50 p.m. following a report of a reckless driver on John Bragg Hwy. The complainant stated that the driver had wrecked or run off the road several times and was headed east toward Woodbury in the westbound lane.

While en route to the location Deputy Moss was notified by dispatch the driver as headed back west toward Murfreesboro. When he first observed the vehicle, it was headed west and crossed over the median. The vehicle then began traveling back east toward Woodbury.

Deputy Moss was able to get the vehicle stopped just east of Hollis Creek Road on John Bragg Hwy.

As Deputy Moss approached the vehicle he observed a white male in the driver’s seat and could smell an odor which was consistent with that of an alcoholic beverage. He ordered the driver to put the car in park and turn off the ignition.

Deputy Moss observed the driver, Kendall, was having difficulty holding his head up, that his speech was slurred, and he appeared to be drooling. Kendall also had blood on his right cheek and neck. Kendall was unable to tell Deputy Moss if he had injured himself.

When Deputy Moss had Kendall step out of the vehicle, he stumbled out into the roadway. The deputy escorted Kendall to the back of the vehicle, where he said he had stolen the car and was “not afraid” of the deputy.

Kendall was then placed under arrest for DUI. Due to concern for Kendall’s safety the deputy did not have him perform a field sobriety test.

Deputy Seth Perry arrived on scene and had Kendell sit down and wait for EMS to arrive. EMS transported Kendall to Stones River Hospital for treatment and he was then transported to the Cannon County Jail.