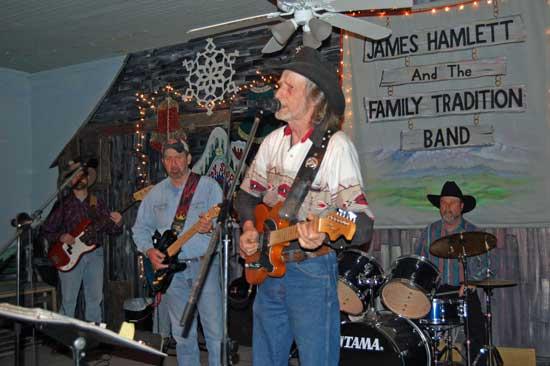 Going by the name of James Hamlett and the Family Tradition, the musicians who perform at the Saturday night Liberty Dance are, from left, Max Hight, Johnny Gentry, James Hamlett and Steve Hill. (Photo by Ken Beck)
If things turned out as scripted, James Hamlett is going to be in a Hollywood movie that plans to shoot one day in late January at the Liberty Dance with many of the dance hall regulars appearing as extras.

The film, “Love Don’t Let Me Down,” stars Gwyneth Paltrow, Tim McGraw and Garrett Hedlund, while Tobey Maguire is producing, but don’t break your neck hoping for a peek at Paltrow or McGraw as neither are expected for the dance hall scene.

“It will be more or less like a regular Saturday night dance,” says Hamlett, who has already signed on for the film and will be in his regular spot on stage leading a band and probably singing a country standard. “It’ll be a lot of fun.”

Hamlett has been told the shot will be one of the beginning scenes. “I don’t think Tim McGraw will be here,” he says.

However, the stars are expected to sing in the country music drama about a has-been country singer (Paltrow) who tries to make a comeback with the help of her husband-manager (McGraw) and an up-and-coming songwriter (Hedlund). The latter portrayed McGraw’s son in the 2004 film “Friday Night Lights.”