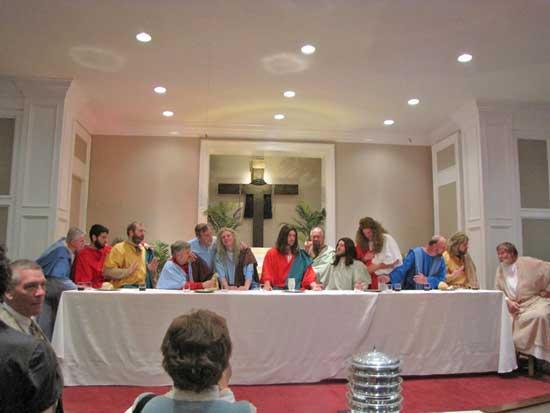 First Baptist Church of Woodbury brought the Living Lord’s Supper to the public Thursday evening during a service the day before Good Friday.

The men of the church portrayed the Apostles at the Last Supper, and they have just been told by their Master that someone in the Upper Room will betray him tonight.

The Apostles were arranged beside Jesus just as the Davinci painting of The Last Supper. And after they were told this, the men individually speak to the audience and through their talks they show some of who they are and why they feel that they are not worthy to be in his company.

Thursday in this case is called Maundy Thursday because Jesus gave them a command to love and to serve one another. This is also the last time Jesus would meet with them until after his resurrection from the grave. The Apostles leave the room and go into the Garden of Gethsemane where Judas betrayed Jesus with a kiss and he was then taken by the soldiers.


This “Last Supper” was during the Jewish Passover to where everyone of the Jewish faith went to be safe in a house. It comes from when the Israelites were slaves to the Egyptians and God caused a curse to befall all those who did not put a sign above the mantle of the door draped with blood from a pure animal (a lamb) which showed the angel of death which house to over look. The penalty for this was death of the first born of the family. This tradition continued on throughtout history and they practice it today.

Jesus needed a place for Him and His Apostles to share a room along with supper (which he instituted a new tradition instead of Passover which the Jews did. At this supper Jesus washed the feet of the men to show them that to be a leader you must also become a servant and that the mightiest of all virtues was love for one another. He was showing them that they needed to humble them selves. The power the Father would later give to them later through the Holy Spirit would put them in a position to win souls for Christ. But he also told them that they had to minister to the people.

At this supper he told them that someone in the group of 12 apostles was going to betray him and they all wondered who it was, even questioning themselves. They did this because only Jesus had the ability to know who it was.

The depiction of the last supper was painted by Leonardo Davinci in the middle ages portraying what he believed what it would look like. There are other paintings of this event where others have shown what they think it was like, but the majority of the art world has acknowledged this particular painting to be the standard.

Jesus had sent John and Peter ahead of the group to a certain house and they found the house and prepared for the supper. It was in the upper room, maybe even a loft, but Peter and John had everything ready for them when they arrived. They had loaves of bread, wine and a wash basin, which was a tradition for eating. He used the water and basin to wash the feet of the Apostles. After midnight they left the room and went to the Garden of Gethsemane where Jesus was praying. It was there that Judas brought some soldiers to apprehend him. He showed them who he was by kissing him, he betrayed Jesus with a kiss. He was then taken to the Sanhedrin to answer charges that they had laid against him.