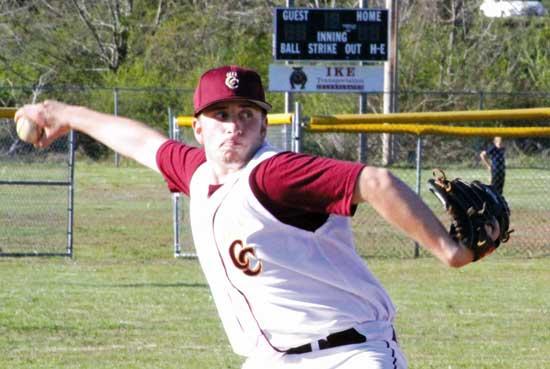 Lions junior pitcher Brock Francis struck out four and scattered four hits to pick up the win on the mound as Cannon County turned back York to sweep the District 8-AA doublehader Wednesday (April 6). (TONY STINNETT photo).
Cannon County's baseball team has changed its fortunes and is streaking in a new direction after struggling in the early portion of the season.

The Lions (3-9-1) won their third straight game Thursday, coming from behind to tame the MTCS Cougars 8-7. One day earlier the Lions swept a District 8-AA doubleheader from York to get in the win column and lay the foundation for its streak.

Trent Fagan gave the Lions a lift in the opener against York, pitching six innings of three-hit baseball, striking out eight and walking none to notch the win on the mound. Fagan faced just four over the minimum in his dominant performance.

Fagan helped his cause at the plate with a three-run home run in the sixth. He drove in five runs and scored two more.

Sophomore shortstop Austin Brown also continued his torrid offensive season, going 2-for-4 with a RBI and two runs scored. Colin Jones belted a triple and scored three runs from his leadoff spot as the Lions scored nine in the first three innings and never looked back.

Cannon County put on an offensive clinic to complete the doubleheader sweep, 20-8, against York.

Four Lions had multi-hit games, led by Brown's 4-for-5 performance that included a double, five RBI and two runs scored. Dalton Bell was 3-for-4 with three RBI and four runs scored, Jones was 2-for-5 with four RBI and run scored. Chase Gunter was 2-for-3 with two RBI and one run scored. Fagan was 1-for-4 with a three-run home run - his second circuit clout of the day.

Brock Francis picked up the win on the mound, pitching four innings of four-hit baseball before giving way to Bell, who pitched three innings of one-hit baseball to finish off the Dragons.

Brent Duggin's bases-loaded double with two outs in the bottom of the seventh tied the game, and Gunter's followed with a single to plate Francis with the winning run as the Lions showed fight with an impressive 8-7 comeback win against MTCS.

Cody Phillips was outstanding as he put together a 3-for-4 performance with a home run, three RBI and three runs scored. Phillips' two-run round tripper had given the Lions a 5-4 advantage in the bottom of the third.

"It was a good week and we have started to play better overall," Cannon County Head Coach Eddie Cunningham said. "That MTCS game was a big win for us because we showed some fight and didn't lay down against a good team. We've been in games early in the year and couldn't find ways to win them. Now we are finding ways to win so that shows progress and maturity."

Brown picked up the win on the mound with 2-2/3 innings of one-hit baseball in relief. Brown was 1-for-4 at the plate.