Lions Looking For Winning Formula In 2011-12 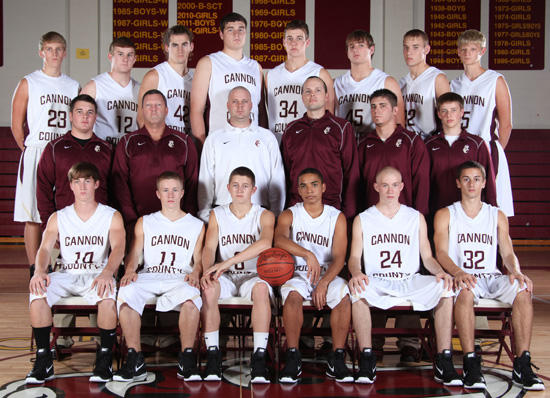 There are positives to having eight quality seniors on one basketball team.

The negatives, if any, could be on display this week when Cannon County opens the season with road games at Cumberland County (Monday) and Marion County (Friday). Tipoff for both games is 7:30 p.m., or 15 minutes following the completion of the girls games, which tip at 6 p.m.

Because of the quality and depth of last year's senior class, which led a 20-win season and Sub-state run, most of the players on the 2011-12 roster saw little or no game action.

"We have been inconsistent in practice due to players not receiving enough floor time last year," said Cannon County Head Coach Matt Rigsby, who was named District 8-AA Coach of the Year last season and enters the fourth-season at his alma mater. "Because they are not used to playing together you see some inconsistency and turnovers. We can't find a group on the floor to work together because it's hard to get them on the same page. We have close to 16-to-18 guys who could be in the mix for playing time.

"The guys do not accept the theory that they will not be successful because we lost eight seniors from our Sub-state run."

Determining who gets the minutes and plays critical roles will be determined through intense practices and early-season games.

Junior guard Jarrett Melton is the most seasoned returning player. Melton saw action as a reserve guard during his sophomore season but his minutes were substantially limited in the second half of the season.

"Jarrett is a hard-nosed, tough competitor," Rigsby said. "He hates to lose. He is one of the few guys we have to penetrate and create his own shot. Jarrett was able to get some key playing time in important district games last season and that experience should show early."

The Lions also are implementing a new defensive philosophy in 2011-12 and, due to changing personnel, will also do things differently from an offensive standpoint.

"We have had to throw a lot at them early in practice and that has been slow due to implementing the new defense," Rigsby said. "As a whole it has went OK considering work ethic, intensity and competition between the guys in practice."

That quality has been prevalent concerning the Lions.

"Practices have been more intense than last year," Rigsby said. "These guys get after one another and work hard, which is a positive. I believe we have quality depth on the roster from the seniors on down so we will play different combinations together and get several players looks in practice until we settle on our rotation."

In addition to Melton, sophomore Cory Henley also is a name fans will want to get used to. Henley led the team in scoring during summer team camps and was a fierce competitor and scorer for the Lions' freshman team. He is another who can create his own shot and help get the team out of difficult situations.

Zach Higgins could be one of the best spot-up shooters in District 8-AA and Justin Tobin is an athletic, lengthy players who will be a key defender who also can score in bunches. Tobin joined the team after the football season and is continuing to work on his shot. Sophomore Tommy Mitchell performs well in practice but must become consistent in games when his time comes.

Cannon County's inside game will also be a work in progress. Sophomore Tanner Larson has emerged as the team's top defensive rebounder through the summer and preseason practices. He also is a strong finisher inside. Ethan Bryson and Alex Davenport, both juniors, also figure prominently inside. Bryson is a big post presence and a great shot blocker, while Davenport is a strong offensive rebounder who could provide numerous second-shot opportunities.

Also watch for newcomers Brad Hutchins and Cody Petro to make a difference. Hutchins is back on the team after taking his junior season off. He is a big man with the potential to change a game with his inside-out approach. Because Hutchins has good range for a big man, he also can create match-up problems. Petro will be a quick, heady guard and should help the team's defensive approach.

As the season starts Cannon County will focus on more consistency offensively and defensively, as well as improving physicality in the post. The Lions guards will also have to protect the ball and prove they can handle pressure because odds are opposing teams will likely make the young guards perform under such duress.

I look forward to watching you have a GREAT season!