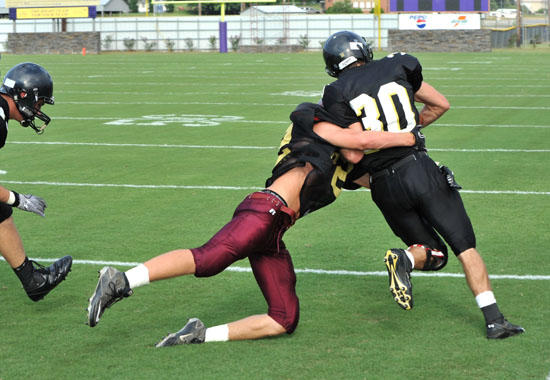 Safety Justin Tobin, 22, makes a tackle during a recent scrimmage. Tobin will be counted on as one of the Lions' top performers in 2011. CCHS opens the season at Watertown Friday. Kickoff is 7 p.m.
Anticipation for the 2011 football season ends this week as Cannon County opens the campaign at Watertown - a short 24 miles away.

Cannon County has performed well in two preseason scrimmages and its jamboree, offering hope for what could be a promising year.

“I’ve been waiting for this since my (shoulder) surgery (last winter),” said junior Brandon James. “I can’t wait to get back on the football field. We have been working hard and the results have been pretty good in the practices and scrimmages.”

Scrimmages have been competitive and practices intense; however, results start counting Friday when the Lions scrap with the Purple Tigers.

Watertown is coming off a 4-6 campaign in which it missed the playoffs for the first time since 2006. It was a rebuilding year of sorts and the Tigers are primed for another playoff run in 2011.

Cannon County and Watertown are similar in that they have quality players and expect a reversal of fortunes in 2011, but each team lacks overall depth at certain key positions.

“We are a lot a like in that way,” Cannon County Head Coach Joel Schrenk said. “Coach (Gavin) Webster and I are friends and when I got the job we started talking about getting a game scheduled. I’m glad it worked out. We need to be playing. It can become a good rivalry and it’s a close trip for our fans.”

Each team also will start a sophomore quarterback with Ryan Jordan getting his first high school start Friday. Watertown starts sophomore Ty Jobe. The difference between the two is Jobe played as a freshman and barely missed the 1,000-yard mark. He will provide a stern test for the Lions.

“We are ready and excited to go,” Schrenk said. “It’s going to be a great atmosphere and our kids deserve that. They have worked hard and they have enjoyed a good offseason. Now it’s time to play and it’s good that people are excited about the start of the 2011 football season.”