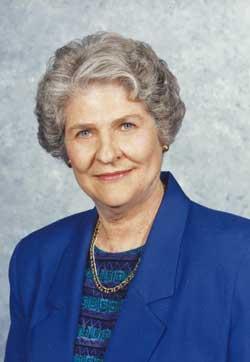 WILMA ADAMS
A woman who has dedicated her life to making life better for the people of her native Cannon County will be honored April 15.

Friends of Adams Memorial Library will have it's fourth annual "Roast" on Thursday, April 15. Wilma Adams, widow of Frank Adams and well known Cannon County philanthropist, has been chosen to be the subject of the roast this year. The roast will be held at Cannon County High School cafeteria beginning at 7 o'clock.

All the proceeds from the roast will go toward construction of a $1.5 million addition to the library.

After a delicious meal is served, four of Wilma's "friends" will proceed to tell the audience some of their experiences with her or something in which she has been involved that many will hear for the first time.

The roasters include Austin Jennings, a high school classmate; Fred Adams, a nephew, Dr Darryl Deason, Chairman of Arts Center of Cannn County board; and John Higgins, a family member. Wilma's three sisters, Drunell Higgins, Dean Barker and Gladys Hayes will also tell in three minutes each some of their refletions on life with Wilma.

The emcee for the evening will be Doug Combs, owner of radio station WBRY.

The public is invited to attend this event and may do so by making reservations prior to April 12 by calling Charlie Harrell, president of the Friends of the Library group at 563-5480 or calling the library at 563-5861.

The Friends of Adams Memorial Library is a group of volunteers who work year-round to help the professional staff at the library provide services not financed in the city and county budgets.

• After graduation from Woodbury Central High School in 1944 she entered into St. Thomas School of Nursing in Nashville, becoming a Registered Nurse in 1947.

• Upon entering RN training she became a member of the U.S. Cadet Nurse Corp.

• She then went to work in San Jose, California at O'Conner Hospital, returning to Woodbury in 1948 and began work at Good Samaritan Hospital.

• In 1949 she married Frank Adams. They resided in Woodbury and operated a dairy farm.

• In 1969 Frank and Wilma bought and operated a hardware store on the west side of the square in Woodbury until 1974.

• Frank died in 1976 of a heart attack. Wilma continues to reside in Woodbury.

• She became a volunteer in the community, volunteering 15 years at the hospital and Adams Memorial Library.

• Wilma began to travel extensively with family and friends to many interesting places around the world the next 20 years.

• She was a driving force in the success of the Arts Center since its beginning and is a Life Member of the Board of Directors.

• She has appeared in numerous productions at the Arts Center, ranging from comedy to musicals.

• Wilma has been a member of the Woodbury Church of Christ since 1950.

• Wilma is now the self-proclaimed matriarch of the Francis family.