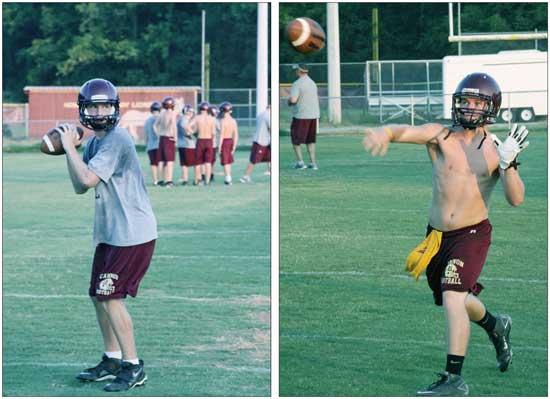 Ryan Jordan, left, and Brandon James are battle for the starting quarterback job at CCHS.
There is no quarterback controversy at Cannon County High School.

There is; however, an intense and unique battle brewing for the position that could end with the Lions utilizing a two-quarterback system for 2011.

Junior Brandon James and sophomore Ryan Jordan are the top two combatants and each bring strong qualities to the offense. Both also are chiefly inexperienced.

"I am not against going with two quarterbacks if that's what we need to do," Cannon County Head Football Coach Joel Schrenk said. "It will be an interesting battle and it may be that it is best that we play two quarterbacks. We will see how that progresses."

Schrenk said it could be that both players are on the field, offensively, at the same time for many sets.

James saw action under center in junior varsity games as a freshman and was heir apparent to the position as a sophomore before a shoulder injury that eventually required surgery took him out of the mix. Jordan played three snaps under center as a freshman.

Regardless of which quarterback is under center, experience will not be a premium.

"I'm ready to do whatever this team needs me to do in order to be successful," James said. "I didn't get to work at quarterback last season but we haven't changed a lot, just a few routes here or there. I just have to get my concepts down. I feel comfortable playing the position in a game. I feel I can do it."

"I think I'm having my fair shot at (competing for the position)," Jordan said. "Coach Schrenk has been giving me good opportunities to show myself and prove I can do it. (Brandon and I) have to mature and lead the team. There's a lot to work on, but I believe I'm coming along."

Schrenk said each quarterback brings special qualities to the offense that could lend to utilizing both players.

"It's a lot like what we had two years ago in that (Jordan) is a lot like Lee Cooper, more of the basic offensive set, can throw it round pretty good," Schrenk said. "Brandon is a lot like Andrew Woodin, very mobile, can run the zone read, run the wildcat stuff and is still effective enough as a thrower to be a threat. They each have their own specialities and we can build our package around each one."

James has two years of varsity experience. He led the team in kickoff  returns and was among the leaders in receptions in 2010.

The rising junior does not lack for confidence.

Jordan says he has spent extra time in the film room, learning the offense inside and out.

"I am still going to have to get use to the tempo of high school in the early games," Jordan said. "I have really worked hard, trying to fight for a job, and I have worked hard in the classroom to pick up the offense. I had to write down the plays on the sideline last year and that helped me a lot as far as learning where receivers should be and how to run the offense."

Schrenk said both quarterbacks have developed in terms of grasping the offense.

"Brandon has come along well and Ryan has a great grasp of the offense," Schrenk said. "Sometimes I think Ryan doubts himself but he has a grasp of what is going on. Brandon can do things a little more athletically but they are both in decent shape right now. We just have to continue to progress."

The Lions will resume preseason practice this week and they will play host to White County for the first fall scrimmage Thursday.