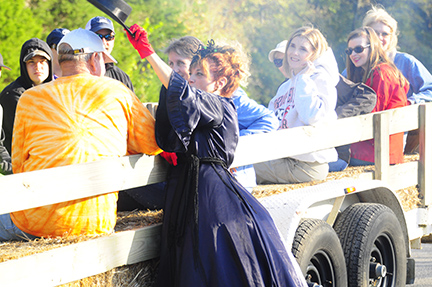 Lori Christensen, Woodbury, as Elizabeth Dale, "The Black Widow" , interacting with a wagon load of spectator .

Indians as well as bears, deer and other abundant wildlife roamed the hills and hollers that later became DeKalb County when Adam Dale came over the mountains in 1797.

He pioneered from his native state of Maryland, where he had been born in 1768. As a young boy he had served his country with his father during the American Revolutionary War against the British. It was his land grant for his military service that brought him here. He established the town of Liberty as the first white settler to the area. After he had erected a log cabin and cleared some land for planting he sent word to his family and friends in Maryland to join him. His wife, Polly Hall Dale, brought their children and came west with her kin and neighbors. One of these was her toddler, Elizabeth, whose many marriages led to her becoming known as "The Black Widow of Hazel Green." Both Adam and his well known daughter will be portrayed in the 11th History Hayride at Edgar Evins State Park on Saturday, Oct. 8th.

Adam Dale will be played by Charles Robinson of Liberty and the mysterious Elizabeth Dale by Lori Christensen of Woodbury. In addition to the two Dales there will be nine more historical characters to relate their stories to the audience seated on the hay wagons as they make a circuit to the various scenes. A total of ten wagons will be leaving at approximately 30 minute intervals from the park office throughout the afternoon and evening. The first report time will be 1:30 p.m. and the last will be 6:30 p.m. A circuit will take approximately 2 to 2 1/2 hours during which the audience will remain seated on the wagons. A Tour Guide or narrator on each wagon to give additional history between stops.

The cost is $15 per person. This is not a Halloween themed event and is not recommended for small children or anyone unable to sit quietly for the approximately 2 hour performance. Reservations will be required and will be for specific report times. On-line reservations may be made at https://www.tnvacation.com/events/8740 If help is needed making reservations persons may call the park office at (931) 858-2114 or toll free at 1-800-250-8619 for contact information for Fount Bertram, President of the Friends of Edgar Evins State Park. He or his wife will be glad to assist you.

Complimentary warm beverages will be offered after the rides, along with homemade cookies packaged and priced for individual sales. If the weather is chilly there will be a campfire and marshmallows to roast outside the office.

Cabins and camping are also available at the park but require separate reservations. Call the park office for details.