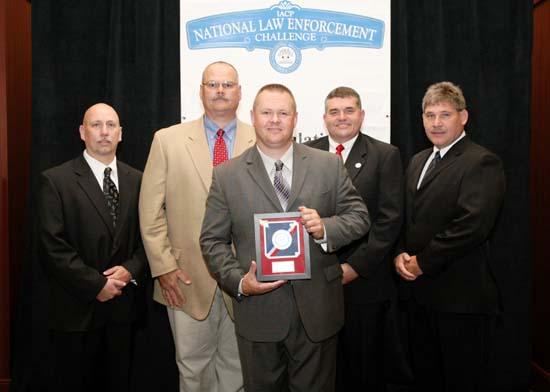 Woodbury Police Chief Tony Burnett along with LEL Clint Shrum and other network coordinators from throughout the Cumberland Region recently went to the International Association of Chief of Police Conference in Orlando, Florida.

The Cumberland Region was there to accept a national award for the third year in a row. The award is given to the network throughout the United States who has shown extraordinary efforts to keep the highways safe by means of public awareness, enforcement, and coordinated efforts to keep down fatalities and injury accidents across the network.

The department also receives a Network Coordinator grant from the Governor’s Highways Safety Office which can be used for equipment and overtime for the department along with travel for Chief Burnett to assist other agencies throughout the Cumberland Region.

"I am proud that I have been able to work with the Governor’s office throughout the last five years," Chief Burnett said. "The department has received almost $250,000 in grant funds since I became chief. This has allowed us to be equipped with the best of equipment and it also allows the men of our department to better serve the citizens of Woodbury.

"Cameras, radars, and computers have allowed us to do a more efficient job while at the same time providing evidence for the prosecution of cases that we would not normally have."