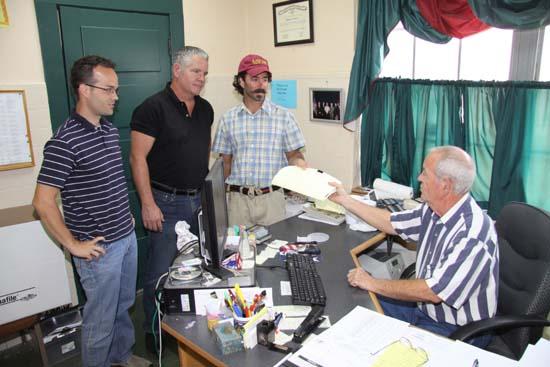 Citizens working to start a distillery on Short Mountain obtained enough signatures to be on the ballot for the November general election. Presenting the petition Friday to Election Administrator Stan Dobson, seated, are (from left) Christian Grantham, John Whittemore and Billy Kaufman.

A group wanting to create a Tennessee brand of distilled spirits in Cannon County, Tennessee turned in petition signatures Friday at noon for a county wide referendum.

The signatures must be validated and approved by the Cannon County Commission before voters can decide in the county's November general election whether or not they want a distillery under a new state law.

"This is about jobs," said Kaufman. "It's also about tourism, revenue and the kind of sustainability we need to preserve our way of life."

In 2009, the state legislature passed a law allowing legal distilleries across the state of Tennessee. Lawmakers put in place a referendum process for counties that do not already allow liquor by the drink or package stores. Distillery referendum petitions require a total number of signatures equal to the county's total votes cast in the last Presidential election. The group needs 554 validated signatures.

Cannon County has a rich agricultural heritage that also produced what some say was the best distilled spirits in the country before and during prohibition. Moonshine from the hills of Cannon County is specifically celebrated in old time country music songs once sung at the Grand Ole Opry by Uncle Dave Macon, Porter Wagoner and others. Tennessee is well known around the world for Jack Daniel's and George Dickel aged whiskeys.

"Throughout this process we spoke with a lot of people, young and old, who have called Cannon County home all their life," Kaufman said. "The support and enthusiasm people are sharing with us has been overwhelmingly positive."

"We want to work directly with local farmers and businesses as we grow," Kaufman said. "We want to share our local history with the world, and we want tourism to bring new opportunities for local businesses."

Kaufman and his brothers, David and Ben, are the great-grand children of Jesse Shwayder, the founder of another well-known American brand Samsonite 100 years ago in 1910. Their grandfather, Louis Degan, ran Samsonite's Murfreesboro, TN location for decades employing many Middle Tennesseans.

Short Mountain Distillery will be a small-batch craft distiller creating specialty brands of moonshine and aged whiskey. For more information and photos from today's filing, visit our website at http://www.shortmountaindistillery.com.