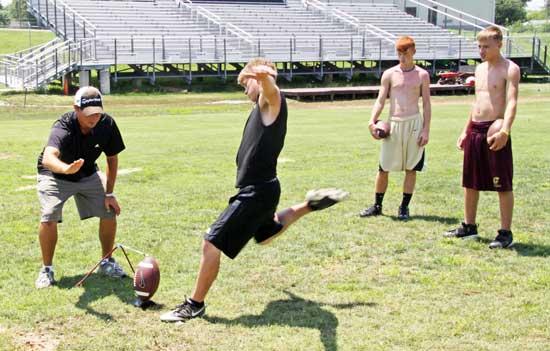 James Wilhoit works with Brandon James as Colin Jones, back left, and Justin Tobin await their turn.
Cannon County’s football team put together a memorable run that ended with a winning ledger and a playoff berth in 2009 but that brilliant season perhaps could have been even better with a stronger kicking game.

Lions second-year head coach Joel Schrenk, with the assistance of local businessmen, is hopeful instruction from an elite kicking coach will help improve the team’s special teams deficiencies from a year ago during what offers to be a promising 2010 campaign.

“We were not good in the kicking game at all last year,” Schrenk said. “That hurt us in field position, hurt us on extra points, which I don’t think we hit but four all year and we probably averaged four touchdowns a game. I think this will help us, not only with our kicking and punting, but also with our overall kicking game and field position.”

“Some men in the community came to me and said they would like to help and wanted to know what they could do,” Schrenk said. “We thought about it and there was not one particular thing. The suggestion was to have a kicking specialist to come in and work with the boys and we did that. The men in the community paid for this and I think it will be a big asset for us.”

Wilhoit, who starred for the Vols from 2003-06 after a brilliant prep career at Hendersonville, saw promising results during his day with the Lions.

“We have some good kickers and I think more than anything they are just raw and they have never known the proper way to kick and punt,” Wilhoit said. “You want to be able to help specialists and that’s my goal. It is neat seeing guys who have not had the opportunity to be coached and have these type of advantages, and I think what (Schrenk) is doing is great. He’s trying to help his team and special teams are part of that.”

Improving special teams state-wide not only is Wilhoit’s passion, but it also is his newfound profession. After working as legendary coach Gary Zauner’s personal assistant for two years and learning his highly acclaimed kicking and punting techniques, Wilhoit decided it was time to improve kicking across the state of Tennessee by teaching these tools.

“(Zauner) has coached 19 (NFL) Pro Bowlers and to work with him and sit behind the camera with him and watch all these NFL guys and learn how to properly coach kickers and punters was great,” Wilhoit said. “You can be a great kicker or punter but that does not mean you can coach kicking or punting. I thought about the fact that I was not able to get that proper coaching and I wanted to come back and try to do the same things for these guys.

“It’s been neat to see young guys learn the proper fundamentals and see guys improve. In the next couple of years I think we are really going to see the kickers in the state of Tennessee become much more improved.”

Brandon James, Justin Tobin and Colin James were among the Cannon County varsity players who spent the day working with Wilhoit, and select players from the sixth-, seventh-, and eighth-grades also received invites.

“This has helped a lot. Things already are smoother and easier to pick up,” said Jones, a rising senior who began kicking midway through the 2009 season. “I believe this will help our team a lot. We lost a few games last year by just a few points and the kicking game could have made a difference. I believe you will see competition in the area of special teams increase.”

Though a day of tutoring with Wilhoit clearly was providing results during his intense clinic, players realize an eight-hour session is only the beginning.

“You still have to put in the work,” Tobin said. “You can’t just come here and work on it today and expect to be better. You have to continue to work on things and work on the technique. We are going to take the challenge and do that. This (clinic) has been a little challenging but you just keep working, listening, practicing and concentrate on the technique and you can feel it getting better.”

Wilhoit said the Lions’ players have a keen understanding of what it takes to be good in the kicking game but they have to hone their skills to transfer success onto the playing field.

“The players see initial results but it’s really staying with it,” Wilhoit said. “As I tell them, it’s not always what I do here. I can’t wave a magic wand and make them better, but I can give them the tools to get better and tell them what they are doing wrong and why they are doing it. I think now the guys will understand the proper fundamentals. They have watched film and know where to go from here. If the special teams can help (Cannon County) win a couple games and be improved then I have done my job.”

Wilhoit worked with Cannon County players on place-kicking, punting, kickoffs and long snappers also were involved. Wilhoit videotaped and photographed the players and used those aides to reinforce where improvements needed to be made.

It wasn’t the only video watched during the day-long workout.

Wilhoit, who was named First-Team All-SEC in 2006 and Freshman All-American in 2003, is the second all-time leading scorer in Tennessee football history. He enjoyed many fabulous moments during his career but one resonates. Just minutes after missing what would have been a game-tying extra point, Wilhoit nailed the game-winning, 50-yard field goal with six seconds remaining against nemesis Florida in 2004.

“I don’t think I would be a kicking consultant if I had missed that field goal against Florida because (in this state) you would be known as the guy who missed the field goal against Florida,” Wilhoit said. “That kick really changed my life and it was the defining moment of my life. It did not happen by accident. I have a Masters Degree in sports psychology and I am really big in the mental game. To overcome missing an extra point and coming back to try and hit a 50-yard field goal against your biggest rival is something that is very difficult.”

The point was not lost with the Lions.

“We watched video during the day and kicked and before lunch we watched video of (Wilhoit’s) field goal against Florida,” Schrenk said. “He also showed the missed extra point before that field goal and talked about the sports psychology of it and how if his mind was not right there was no way he was going to make the game-winner. We learned more than kicking today, and (Wilhoit) is not just another dude; he knows what he is talking about and the guys understand that.”

Wilhoit, who spent last season as an intern on Lane Kiffin’s staff, also is pleased with the direction of the Tennessee football program under first-year coach Derek Dooley.

“I’m excited there is a little more respect for the traditions of Tennessee and Dooley is building the program on integrity,” Wilhoit said. “I’m excited to see what the future is going to hold. Everyone wants to win and win now but I think if we are patient people will see the program turning around.

“Dooley is big on special teams and he runs the special teams meetings and personally meets with his punters and kickers daily. That is different than Lane Kiffin who didn’t even know the kicker’s names. I’m looking forward to seeing what Dooley does.”

Wilhoit also is excited to follow how the Cannon County Lions perform in the kicking game during the 2010 season.

Brandon James works on place-kicking under the watchful eye of James Wilhoit.