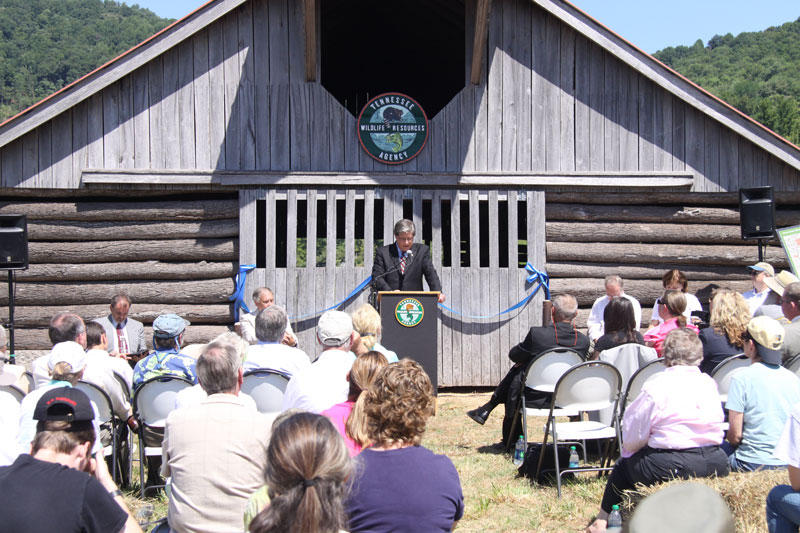 William C. Killian, U.S. Attorney of the Eastern District of Tennessee, talks about how the Headwaters Wildlife Management land was obtained.

WASHINGTON – The U.S. Department of Justice has transferred to the state of Tennessee approximately 1,000 acres of undeveloped land in Cannon County, Tenn., as a result of a federal criminal conviction of two individuals for distribution of marijuana.

The transfer was announced by Assistant Attorney General Lanny A. Breuer of the Justice Department’s Criminal Division, U.S. Attorney William C. Killian for the Eastern District of Tennessee, Special Agent in Charge Harry S. Sommers of the Atlanta Division of the Drug Enforcement Administration (DEA) and U.S. Marshal Denny W. King for the Middle District of Tennessee.

The land, located on Short Mountain in Woodbury, Tenn., will be managed by the Tennessee Wildlife Resources Agency and will be known as the Headwaters Wildlife Management Area.  Short Mountain is a critical habitat for plant and animal species, and contains the headwaters for three Tennessee watersheds.  The property will be open to the public for small game hunting, hiking and wildlife viewing.

The land was forfeited to the United States as part of the 2007 federal criminal convictions of Morris Roller and Jeffory Carl Young for distribution of marijuana.  Roller and Young are currently serving federal sentences of 200 and 224 months, respectively.  The transfer was made under a law that allows the Justice Department to convey forfeited property to states for public use for recreation or conservation purposes upon request by the governor or chief executive officer of the state.

“This land transfer highlights the benefits of asset forfeiture as a crime-fighting tool,” said Assistant Attorney General Breuer.  “Our law enforcement efforts put an end to illegal drug production on this land and secured its preservation for years to come.”

“The transfer of this property was accomplished through the cooperative efforts of local, state and federal government agencies,” said U.S. Attorney Killian.  “This historic conveyance of forfeited property, which is the largest transfer for conservation purposes in the past 15 years by the federal government to a governmental entity, will leave a lasting legacy of this wildlife management area for the state of Tennessee and its citizens.  Now, rather than being used for growing marijuana or violating other laws, it will be used for recreational activities such as hiking, fishing and hunting.  Russ Dedrick, my predecessor as U.S. Attorney, is to be congratulated for arranging this donation of land.”

A dedication ceremony was held today on the land.

The Department of Justice Asset Forfeiture Program allows for the transfer of federally forfeited real property to serve various purposes including:  supporting state recreational, preservation or historic purposes; supporting a continuing federal purpose; and assisting a state or local government, or a non-profit entity, in carrying out educational, drug treatment, rehabilitation, housing and other community-based initiatives.  Through these real property transfers the Asset Forfeiture Program contributes to our communities nationwide.