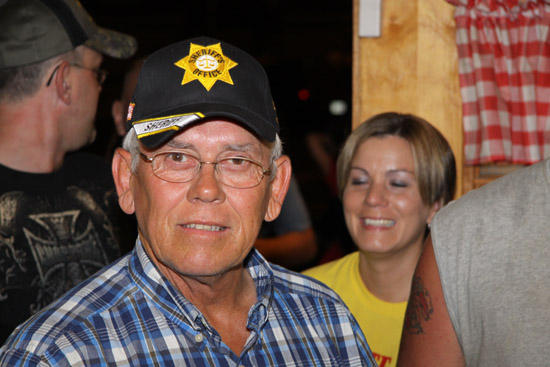 New Cannon County Sheriff Darrell Young sports a sheriff's cap presented to him by family members Thursday night following his victory in the County General Election.
There will be a new sheriff in Cannon County come Sept. 1.

Darrell Young rebounded from a loss to incumbent Billy Nichols in 2006 to capture the seat in Thursday's County General Election.

Young captured 2123 of the 4180 votes cast in the race, compared to 1436 for Nichols. Nichols came out ahead in only one of the county's nine precincts.

Mike Grosch came in third with 434 votes while Jack Miller had 109 and Kenny Wetzel 77.

"I want to thank all of my supporters who worked hard to make this possible," a jubilant Young said as he was surrounded by a throng of supporters at Joe's Place. "I promise not to let them down.

In other county races:

In the Register of Deeds race, Debbie Morris was elected to her seventh term. She beat out Greg Mitchell, winning 2376 votes to Mitchell's 1618.

Lynne D. Foster, who was named interim Circuit Court Clerk in January after her brother, Robert "Hoppy" Davenport retired, was elected to the position by beating out Larry Sanders. Foster received a total of 2499 votes while Sanders had 1346.

Voters returned Bobby Smith to the County Clerk's job for the 10th time. He collected 2028 votes while Matt Teply had 1066, Roger Spry 593 and Terry Russell Reed had 446.

In the races for the 10 county commission seats (each district elects two representatives):

Mark Barker and James Russell Reed were elected in the 1st District.

Jimmy Mingle and Todd Hollandsworth were elected in the 2nd District.

Kevin Dale George and Jim Bush were elected in the 3rd District.

Joe Wimberly and Clint Higgins were elected in the 4th District.

Bob Stoetzel and Kevin Mooneyham were elected in the 5th District.

For the Cannon County Board of Education, Michael L. Mayfield (281) beat out Shelley Walkup (218) and William Melton (111) in the 5th District and Chris Blackburn was re-elected in in the 2nd District.

Print
Members Opinions:
[Delete]
I know you will do a great job!!!
[Delete]
congratulations to Darrell Young our New Sheriff, some of i lost and some i won- but congrats to all the winners and it was a good run, no mud slinging and nasty comments.
jimgibbs
[Delete]
Congratulations Darrell. --- It's about time that we have a fresh, professional approach to law enforcement. --- Good campaign, good job!! I trust that you will be a good PEOPLE’S sheriff.