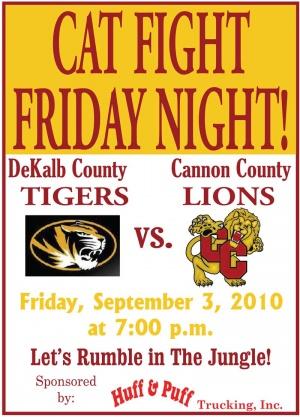 Rivalries bring out the spirit of sport. Rivalry games can define seasons, create heroes and legends, and they also can turn families and friends against one another - at least for one night.

Some rivalries are born of familiarity and proximity, while some are defined by longevity of the teams involved. Absolute hatred is a primer to any good rivalry, in regard to sports.

The longstanding rivalry that exists between high schools in Woodbury and Smithville has all the ingredients that create a fevered disdain for one another. It will be on display when DeKalb County faces Cannon County at Fred Schwartz Field Friday at 7 p.m.

Unlike some rival games, fans don’t have to wait long to have their appetite whetted for this bitter showdown.

“It’s cousins against cousins and neighbors against neighbors,” said longtime Cannon Countian Bruce Daniel. “You get up there on that northern side (of Cannon County) and it’s a cross over. This rivalry is just as big as college rivalry weeks in a lot of people’s mind. It’s a big, big deal and we don’t like them.”

Woodbury Mayor Harold Patrick believes the rivalry heightened and started becoming what it is today in the late 1960s and early 1970s.

“When I noticed the rivalry getting really intense was around 1968 when I was broadcasting football games,” Patrick said. “You noticed the crowds were always bigger for DeKalb County than any other game, be it football or basketball.”

Close proximity formed the rivalry as DeKalb and Cannon Counties border one another; however, the disparagement between fans escalated when Smithville natives took good fun a step too far more than 40 years ago.

“It was 1969 and we had to go there for the football game,” Patrick said. “Several Cannon Countians got their tires slashed over there so when they came to Woodbury for basketball later in the year, our fans returned the favor. Pretty much since then it has been that DeKalb hates us and we hate them and when I say that I am strictly talking sports.

“I have friends in DeKalb County and from April to September they will call and talk but the week of the football game, there really is not any communication. The rivalry is very intense and I’ve witnessed most of that broadcasting.”

Former Cannon County football coach Mike Mayfield did all he could to heighten the intensity of the rivalry during two different stints leading the Lions’ program.

“The towns and schools are so close together that you may have someone playing against their first cousin, their best friend,” Mayfield said. “What creates the rivalry is the closeness and how much pride people have. The people in these two communities have a great deal of pride. When I first came here in the early 1970s the game didn’t seem to mean as much to our kids, but Smithville would come over here slobbering mad and two feet off the ground. I tried to stir up excitement for the game. I wanted enthusiasm for that game because it’s an old rivalry with meaning.”

Through time Mayfield was successful in helping restore the rivalry to its height and that will be on display Sept. 3 when DeKalb County plays at Cannon County.

Hatred? This rivalry has it. The Hatfields and McCoys have nothing on neighbors from Smithville and Woodbury.

“They think they are as good as we are and some of them think they are better than we are, but I never have seen anything in Smithville that excites me,” Mayfield said.

Mayfield was notorious for his speeches about DeKalb County during pep rallies.

“When I got (to Smithville) for the game last season and saw the enthusiasm on both sides and how big the crowd was, I knew what this rivalry was about,” Schrenk said. “We probably had as many people over there as a lot of people we have at a home game. It was fun and it was a great atmosphere. You don’t have to worry about getting the kids up for this game. If anything, you have to worry about keeping them at an even keel.”

Players, past and present, understand the rivalry even if they don’t realize why DeKalb is their chief rival.

“In sports you have to beat DeKalb. No one likes them,” free safety/quarterback Heath Simons said. “I really don’t know the history. That’s just the way it is. It’s been handed down from generation to generation. We work hard every week and we want to win every game but you are really focused for (DeKalb County) because that’s the one you have to win.”

Feelings are deep and passionate on both sides and the history involved between the two schools dictates the high level of scorn one has for the other. The rivalry has featured sheriff’s deputies and city police on stand-by and forming human walls to detour problems. It has prompted mounted patrol in the Cannon County parking lot to protect cars from vandals. And that’s just primer.

“That’s just how fierce it gets with DeKalb County. It’s not like that for any other game, just that one,” Patrick said. “You don’t hate the people there, just the sports. I’m sure if they were talking to you the stories may be contrary to what I’m saying or anyone else in Woodbury, but it’s our biggest rival and we are their biggest rival.”

And the two square off Friday at Schwartz Field for the 2010 edition of the long and heated rivalry.