Courthouse Revitalization Work Only Weeks Away 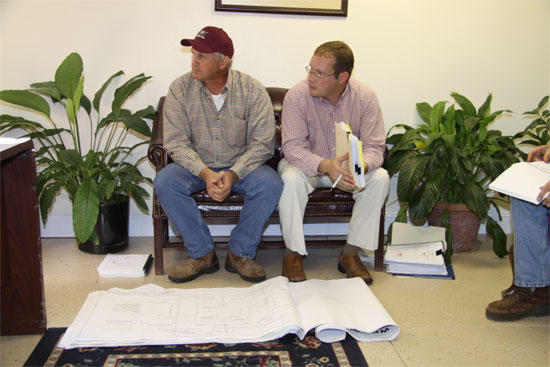 Terry Preston, left, and Tim Pack of Preston Brothers Construction Co. of Woodbury review plans for the courthouse revitalization project Monday. Work is expected to start in two weeks.
A pre-construction conference was held Monday morning at the Cannon County Courthouse to go over final preparations for the much-anticipated courthouse revitalization project.

Terry Preston of Preston Brothers Construction of Woodbury said the work would begin the week after Thanksgiving. The first phase of the work will focus on installing new drainage along Cannon Street.

Preston Brothers Construction won the bid for the project. When all work is eventually completed, in approximately 120 days from when it begins, new trees will be planted around the courthouse, overhead wires will be eliminated, new sidewalks will be laid and concrete will be replaced.

Preston said that while the work will create some traffic and parking problems around the square during contruction, workers will make every effort to keep inconveniences to both businesses, employees and their customers to a minimum.

The project, which has been in the planning stages for a number of years, is being financed primarily through the Tennessee Department of Transportation with a grant from FEMA. Cannon County and the City of Woodbury are each funding 10 percent of the cost.