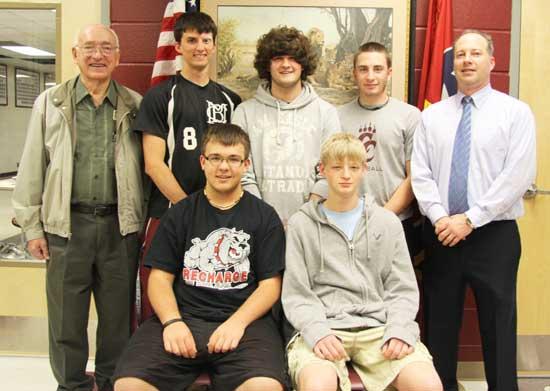 Cannon County High School will send three delegates to Boys State for the first time in its history when the annual program convenes at Tennessee Tech University in May.

Brock Francis, Tyler Stone and Matthew Turney each have been selected as delegates to the Tennessee American Legion Boys State, and Trent Fagan and Dylan Miller are alternates, according to Jim Stone, who represents Hilton Stone American Legion Post 279 in Woodbury. Cannon County’s delegates will be among the 600-plus taking place in the week-long experience May 22-28.

“This is quite an honor and I just want to go to (Boys State) and represent Cannon County well,” Francis said. “Until this year only one person in the Junior class was selected, but this year we were able to get three so this is a big deal for us.”

“We’ve only been able to send one delegate to Boys State in the past but this year we are blessed to be able to send three because of our local American Legion,” said Lisa Choate, the CCHS Boys State Coordinator. “This is 100 percent because of them. We have been piggy-backing on other American Legions in other counties and that’s why we’ve only been able to send one boy (delegate) and one girl (to Girls State). Next year we are also hoping to send three girls to Girls State.”

Only young men who are in the 11th grade and in the upper third of their class are eligible to attend Boys State. The purpose of this is that young men in the 11th grade will have one more year in their respective high schools, and will be in a position to furnish leadership not only in their schools but in their communities during the year.

“Boys State is a program for young men to learn how to become good leaders,” Choate said. “They learn how government works. It is also a way for them to become immersed in the whole idea of community service, and they make lifelong friends. It’s a great experience and they are chosen by the faculty. We select the young men we believe will best represent our county and that we feel have the qualities you are looking for in a leader.”

Charlie Harrell, who serves as Boys State Chief Coordinator for American Legion Post 279, said it was paramount to provide future leaders this opportunity. Harrell was a Boys State delegate in 1950.

“It meant a lot to me from a leadership standpoint,” Harrell said. “A lot of the youngsters who come through end up becoming community and state leaders. We are proud to be able to provide several different young men with this opportunity. We have three delegates and two alternates and we are proud of all five of these young men.”

“Our goal this year was to have three candidates and we have three. We are pushing for more next year,” Stone said. “Anytime we can help young people expand on their leadership capabilities then we are doing the right thing.”

Tyler Stone realized being selected as a Boys State delegate is an honor, but he wasn’t aware of how significant it was until he arrived home the day he learned of his appointment.

“Whenever I was told I was selected I wasn’t sure about it but when I came home and told my parents they kept emphasizing how great it was,” Tyler Stone said. “I took their word for it and the information has been amazing. I am honored.”

Turney echoed the sentiments of his fellow Cannon County delegates.

“I was surprised and honored to be selected,” Turney said. “I hope to go (to Boys State) and represent my school and community well. We want to get the most we can out of this. All of us appreciate the people supporting us and sponsoring us to make this happen.”

Approximately 600 young men representing every count in Tennessee will attend American Legion Boys State this year. They will be assigned to mythical cities for the period of Boys State. Approximately 50 young men will comprise a city. Three cities will make up a county, and the four counties will make the “Mythical 51st State.”