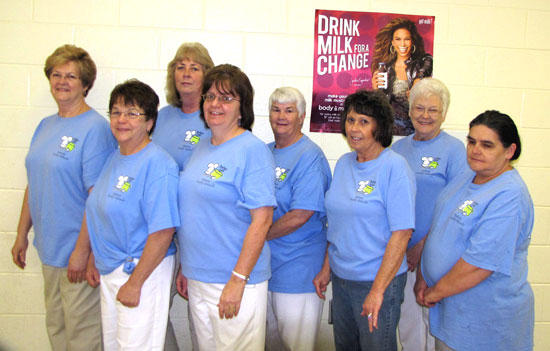 From left to right, starting in the back; Mary Paschal, Sherry Thomas, Joyce Owen, Dorothy Thomas. Front, Margaret Melton, Patty Bailey, Geraldean Long, Brenda Vanatta.
The staff of any school cafeteria has their work cut out for them. First you have hungry students on a time table that makes them rush in and rush out. They have to eat and then they hurry to be done so they can congregate with friends before the next class starts.

At least that was what happened when I went to high school back in the day, and the day was over 40 years ago. I believe we had to pay .35 cents for our meat and three meal. Breakfast was not served at school at that time. Colonel Jim Stone said when he went to school lunch was a dime.

My school was really big though, the graduating class of 1968 (my year) had 635 students. And the lower classes had about the same in each class. It is different at Cannon County High School.

For instance, Colonel Stone and I visited the cafeteria staff Friday. We sat down with them while they ate their lunches (this was at 10:00 a.m.) before the students had their lunch. One of the ladies told me that if they didn't get to eat nowit would be later that afternoon before they could get anything to eat.

The staff, led by Patty Bailey, comes early in the morning to begin cooking the day’s fare. They prepare breakfast which allows those kids who don’t eat at home for whatever reason to be able to have a good day’s head start, all the while they are also preparing lunch.

Bailey says they serve breakfast to 200 students and lunch to 450 students. This goes on five days a week and it takes a lot of coordination and cooperation between all those who share in the preparation of a good nutritious meal.

The staff consists of Bailey with 22 years in the cafeteria, she is the manager, Geraldean Long with 20 years, Margaret Melton with 18 years, she is the assistant manager, Brenda Vanatta nine years, Dorothy (Dot) Thomas and Joyce Owens, both with five years, Sherry Thomas four years and Mary Paschal with two years.

When I sat them down together at a table together (they thought I was going to split them up and have them talk about each other) you could see that they were comfortable with each other, because they could easily joke about the situation of being interviewed by me and the Colonel.

I tried to get them to tell of some funny or ironic thing that might have happened during the preparation of the day’s food. One of the ladies shouted out you mean when so and so dropped the whole pot of mashed potatoes. I said yes something like that, and the response was that they did not serve those potatoes to anyone.

All laughing about this time I hit them up on how they were able to cope with each other all day long without getting on each other's last nerve. Geraldean Long shared that sometimes one or two would get into a disagreement, but the disagreement was straightened out before they left for the day and all would say goodbye or we love you to each other.

I put this question to them: what was the most popular meal prepared for the students, thinking that it would be pizza, but to my surprise was a Taco Salad. Pizza was high on the list, but it was definitely Taco Salad.

The women tell me they are affectionately known by many different names, there are nick-names such as ma, grandma, and granny and if the student doesn't know them very well it is "hey lunch lady."

All the women tell me that they become very close to the students, as most of the women are mothers or grandmothers. They told me they knew all my children on a first name basis and have served the children of the children that have already come through the school system in days past.

After getting comfortable with the ladies I said "ok, tell me the truth there must have been something going on that would be classified as being an embarrassing moment that has gone on during the school day."

That is when they told when Patty Bailey had carried a ketchup dispenser hanging on to her pocket when it got stuck on something and discharged onto her pants leaving a very visible and messy stain. They said that all day long she went around with an apron on the front and one on the back of her trying to hide the mishap.

But the one I like the best is when Margaret Melton does her dance, the Fargo Strut as she calls it. Mrs. Melton tells me that when she does something that comes out just perfect she struts around holding her hands in the air snapping her fingers like Jackie Fargo, the professional wrestler. I asked her to show me and she did and said "Oh. I shouldn't have told you about it, I really don't want it in the paper." I told her I wouldn't put it in the paper.

Most of the women remember when Colonel Stones' mother "Granny" Stone managed the cafeteria at the Woodbury Central High School where the Veterans Memorial Gymnasium stands today.

The women proclaimed they were trained by Elsie Smith and loved her, they also remember Margie McFerrin telling them daily to "smile at the students, because it might be the only smile they get today."

This is the way they treat the students every day.

Colonel Stone added, "I know these special women work hard, because my mother, Granny Stone, managed the High School Cafeteria for over 20 years. She loved to see the kids get plenty of good food.”

He went on to tell the women that he really appreciated the way the cafeteria staff supported the veterans during our annual Veterans Day activities in November. They have been doing this for "15 or 16 years now" the Colonel said.

The job of feeding our children at school takes a certain breed of woman; they have to be like mothers when it comes to insuring that their charges get the proper food and nutrition to be able to meet the demands of their busy day. So we salute them and thank them for a job well done.

Print
Members Opinions:
honeymooner1978
[Delete]
These ladies are to be commended. They are always courteous no matter what heppens when you go threw the cafeteria line, always willing to get whatever we need as teachers and always have smiles on their faces no matter how the students treat them...keep up the wonderful work!!! Years of experience with this bunch!
choateo
[Delete]
Our lunch ladies are some of the most loved people in the school. They are always kind to the students and the teachers. We are a family at CCHS and the lunch ladies are our heart.
Alice
[Delete]
Our cafeteria staff is awesome! They always have a smile and a kind word when I go to the cafeteria. Thanks ladies! You are appreciated!
julie.r0cks
[Delete]
My daughter comes home hungry b/c she says the food at the high school tastes horrible. Maybe we need a little flavor...