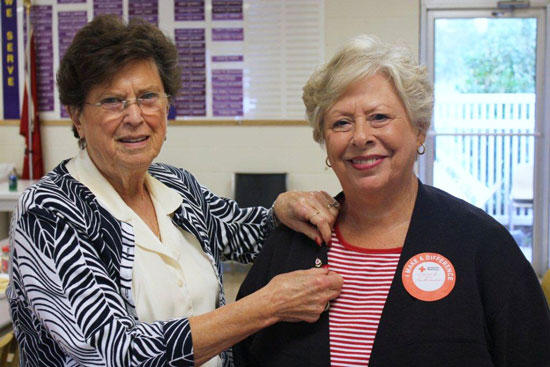 Red Cross set a goal of 52 pints for the 6 hour blood drive, and 60 local heroes signed in to donate, 10 were deferred and 50 pints was collected.

Nicholas Parker donated for his first time. Kathy Bugg, Ed Brown, William Edens, Darla Cunningham, Rachel Lehew, Terry Lehew, and Timothy Paul donated for there first time at the Woodbury Lions Club or after an absent of 2 or more years.

Patsy Hirlston and Barbara Daingerfield donated for their 48 time both receiving a six gallon pin. Brittany Stluka, Erin Higdon, and Mary Parkinson donated their eighth time all receiving a one gallon pin.

Howard Witty donated for his 170th time (that's 21 gallons and 2 pints, with the possibility of helping to save 510 different lives.

The American Red Cross will be back again on the on November 17. This will be a good time to donate because of the upcoming holidays of Thanksgiving, Christmas, and New Years. With all the holidays, many travel and accidents increase and so does the demand for blood. Please mark your calendars now, so that you can make plans to donate in November.