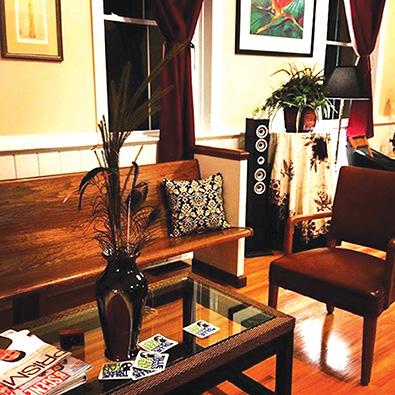 Owning a recording studio may have not been in the original plans for Woodbury residents Ryan Miller and Robyn Taylor, but their new space, BirdSong Studio, has become an affinity of sorts for the music-minded spirits.

Meeting in Nashville years ago, they wanted to steer away from the city and found a Craigslist listing and were deeply attracted to the Woodbury building, which they now call home.

"We've been wanting a break from the Nashville scene. We love Woodbury and love the town, but we're both still connected to Nashville," Taylor said.

Aside from BirdSong Studio, both are connected to the music world in several different ways as Taylor owns Rockin' Robyn Productions, a publicity and promotions firm for artists, while Miller is a musician himself.

The building that houses BirdSong Studio dates back to 1955, as it was once a Presbyterian church. After several years down the line, Cannon County resident Neal Appelbaum purchased the building in 2010.

Once Appelbaum acquired the building, he made sure the proper renovations took place as windows were replaced along with the roof and HVAC system. One of the picturesque aspects of the building is the hardwood flooring which was refinished and the church bell also remains in tact as some of the standout features.

"The current tenants, Robin and Ryan, are the ideal hoped for tenants. By using the building as a live/work space they are also making it a public building for small concerts, but finding it homey enough to live day to day," Appelbaum said about Taylor and Miller.

Taylor says the space is very open and is around 1,600 sq. ft. and most of the area is the sanctuary with a kitchen space in the back of the building. They use the open space for the concerts and the other two rooms are a bedroom and office.

"It's a creative space to perform and for us to write. It's also a great building for the house concerts," Taylor added.
On Sept. 21, BirdSong Studio will host a concert with Humming People, a roots music group from Norway, along with Phil Madeira.

Taylor hopes this trend of booking shows continues, but says they are still trying to determine the frequency of shows and how the schedule will play out in the end.

"We recently had a songwriter showcase and loved that. We would like to do something small scale every week. I think a lot of folks still don't know what is happening. This is our first venture into making it a public space," Taylor added about the future plans for BirdSong Studio.

Regarding the Humming People and Phil Madeira performance, there is a suggested donation of $20 and it begins at 7:30 p.m. BirdSong Studio is located at 213 West High St. in Woodbury, Tenn.