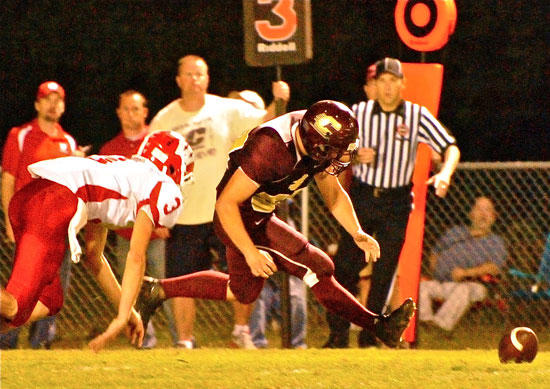 Cannon County defensive lineman Sean Owen scoops up a fumble and returns it for a touchdown Friday. (JOEL FRANKLIN photos)
Cannon County lost a game but may have found some identity during the second half of a 62-36 loss to visiting Westmoreland Friday.

Westmoreland bolted to a 41-12 halftime lead and inserted many of its younger players in the second half, and the Lions took advantage with a solid effort for the final 16 minutes.

"We saw what we can be capable of during the second half," said junior linebacker Ryan McLaurine, who led a defense that forced and recovered three fumbles. "We went in at halftime and decided we were not going to take it anymore. We were able to put together a pretty good second half."

Sophomore quarterback Ryan Jordan had the best night of his young career. Jordan was outstanding, completing 22-of-35 for a career-high 365 yards and four touchdowns - all of 30 yards or longer.

Junior receiver Justin Tobin had a breakout night. He hauled in nine catches for 206 yards and three touchdowns. He scored on Jordan aerials of 48-, 64-, and 33-yards. Tobin averaged 23 yards per reception, constantly beating the Westmoreland secondary and running under perfectly-thrown Jordan passes.

"Tobin was amazing out there," Jordan said. "He was beyond compare with what anyone has done so far. He made great catches and had tough yards after the catch. We can have these kind of nights offensively. We just have to put it all together."

Cody Petro also had an impressive outing. He caught eight passes for 66 yards, including a 31-yard touchdown catch. His catch-and-run on a pass across the middle provided Cannon County's first points midway through the second quarter. At that point Jordan was 7-of-9 through the air and continued to impress throughout the evening.

Hawk Love provided Cannon County's other offensive touchdown - a 1-yard plunge in the fourth quarter. Senior Sean Owen also scored when he scooped up a fumble and rambled 77 yards for the touchdown. It was Owen's first career touchdown.

Cannon County received strong defensive play from McLaurine, Tobin, Thomas Stone, B.J. Daniel, Dalton Ryan, Jackson Mason and Jonathon Smith, who turned in an outstanding second half. Special teams also were improved. Tobin averaged 45.8 yards on his four punts, including a 55-yarder. He had three efforts of 45 yards or more.  The Lions also recovered an onside kick and blocked an extra point when Bradley Gunter busted through the line.

The problem for Cannon County was the first half. The Lions gave up 478 yards rushing, including touchdown runs of 70, 60 and 35 yards. They were down 20-0 to start the game and trailed 41-12 at the half.

"We couldn't stop their rushing game," Cannon County Head Coach Joel Schrenk said. "It has been a consistent problem for us all year. We had a good week of practice, and I felt good about things. We were not reading our keys in the first half and we got caught flat-footed watching in the backfield. At halftime we talked about reading our keys, running downhill and making tackles. It got better. We were playing against some of their younger guys but we got better in the second half. We are definitely going to be be able to build on this for next week, on both offense and defense.

"I was really pleased with the effort in the second half."

The Lions will return to action when they play host to York Friday. Kickoff is 7 p.m.