World's Largest Cedar Bucket Back In The 'Boro 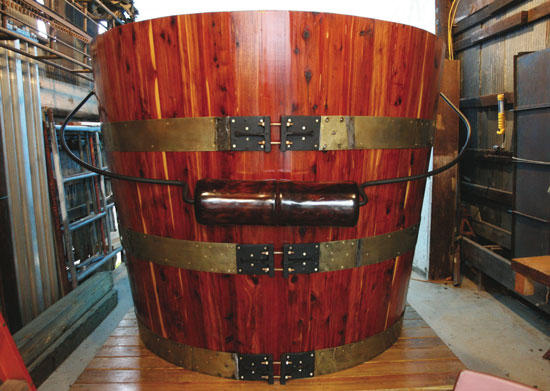 After a June 2005 fire reduced the bucket, which was originally built in 1887 by a local bucket factory, to a pile of charred wood loosing held together by metal bands, it is finally back home in one piece.

“It means more than anybody knows to get it back,” said Sheila Hodges, program coordinator at Cannonsburgh Pioneer Village, adding the fate of the bucket is one of the most asked questions she gets from guests at the park.

“It just breaks their hearts,” she said about when visitors learn about what happened.

Former Cannonsburgh Program Director Fred Trujilio was just as heart broken when arsonists allegedly torched the bucket six years ago and destroyed part of Murfreesboro’s heritage. He described it as “Michael Jackson of Murfreesboro” when he retired in 2009.

Trujilio said it reminded him of Michael Jackson’s death because it was an icon of Murfreesboro, and he never realized what the bucket meant until it was gone.

When he worked at Cannonsburgh, people would also ask him about the bucket and express regret and anger about its burning.

“People were so hurt by the bucket getting burned,” he said. “I’d never seen anything like it.”

Hodges said the people of Rutherford County can heal a little now that the bucket is back in its rightful place.

“It doesn’t just mean a lot to Rutherford County, but to visitors to the county too,” she said.

Murfreesboro was once known for being home to the World’s Largest Cedar Bucket and Hodges has the coffee mugs to prove it. She hopes the return of the bucket will bring more tourism into the reproduction village and Murfreesboro itself.

“It will become our logo again,” she said, adding she is working with the Rutherford County Convention and Visitors Bureau to promote the bucket now that it’s complete.

Murfreesboro can thank the faithful members of the Rutherford County Blacksmiths’ Association, who pledged after the arson to rebuild the famous bucket, for its return.

“It’s been a long wait, and we are happy to get it back,” Hodges said.

Donnie Fergus, president of the Rutherford County Blacksmiths’ Association, said it took longer than expected to rebuild because of problems locating the rare, high-quality red cedar used to built it.

They contracted with Roy Haney’s sawmill in Cannon County to buy the wood.

“But the cedar he would (normally) get would be too small or have too many knots,” Fergus explained about the quality of red cedar available today as compared to in the late 1800s when the original bucket was built.

He added the group also wanted to use the right color of cedar and finding the exact hue of red was also troublesome. It took time but the blacksmiths collected enough wood from Haney to rebuild the bucket.

It also took longer than expected because the association used volunteer labor to reconstruct the bucket, Fergus said.

The delay in finding materials and manpower meant the blacksmiths only started rebuilding the bucket three months ago.

After the blacksmiths located enough wood, they set to work rebuilding the bucket, using all the old hardware from the charred wreckage of the original.

“We’ve used everything original we could,” Fergus said, adding the only salvageable wooden piece was on the handle of the original bucket, which they sanded down and reused.

They then used the remains of the original bucket to calculate its size and started rebuilding from there.

The rebuilt bucket is close to the dimensions of the original, measuring nearly 6 feet tall, 6 feet wide at its base and 7 1/2 feet wide at the top.

“It’s gotta’ be close because all the hardware fit ...” Fergus said. “It ain’t the original, but it’s as close as we could get.”

It was displayed in Murfreesboro until it made an appearance at the World’s Columbia Exposition in 1893 in Chicago and the Louisiana Purchase Exposition in 1904.

The factory reorganized in 1945 when it became known as J.W. Patterson and Sons.

Bill Patterson, whose family owned the bucket factory, was 2 years old when the factory closed.

“It was a curiosity item, one everyone always knew about,” Patterson recalled in a previous interview. “It was a symbol of past industry.”

After the factory burned in 1952, the bucket was displayed at Crigger’s Market and a Georgia amusement park, before being brought home to Murfreesboro in 1976 to be displayed at Cannonsburgh Pioneer Village.

The bucket burned in 2005 from an assumed arson. Its charred remains were on display at Cannonsburgh, behind a locked fence, until the rebuilt bucket was unveiled Saturday.