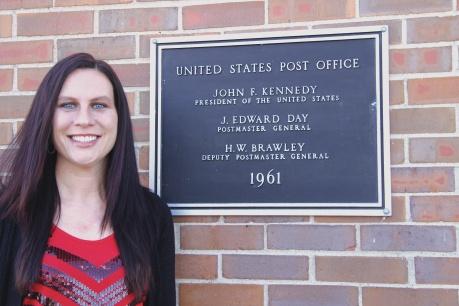 "Nothing's better than a small town, the people and the community," Versluis said.

She's been working with the U.S. Postal Service for 14 years.

"I love it here, we've got great employees, the carriers are fantastic. I love the town too," she said.

Versluis has been married 8 years. "We don't have any children, just four dogs," she said.

Before accepting the Woodbury post, Versluis was postmaster at Readyville.

She began her career with the postal service in Nashville.

"I was in college and I had a couple of friends who were working as carriers," she said. Encouraged by her friends, Versluis took the postal carrier exam and was offered a job as a city carrier in Nashville.

Eventually, she discovered that she missed small-town life. That led to a course in post office management.

"I knew that was the only way I could come back this way," she smiled.

As for potential cuts faced by the U.S. Post Office, Versluis doesn't see any changes coming to Woodbury.

Some area post offices, like Readyville, are facing a cut in hours. Bradyville and Auburntown could also face similar cuts.

Print
Members Opinions:
honeymooner1978
[Delete]
SHE IS GREAT!!! We do miss Jerry alot and seeing his smiling face every morning and the kids just loved him but he was ready to retire and we all wish him well and also wish Mindy the best!!!