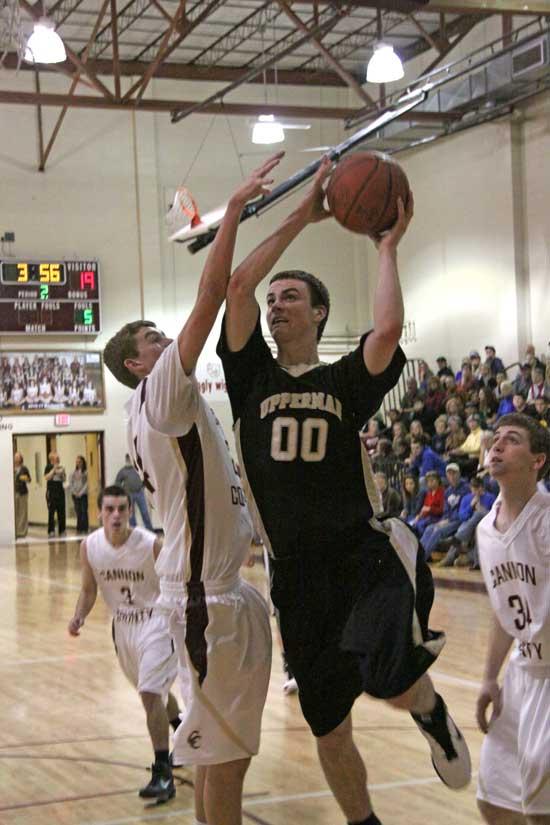 Senior Jared Nave, left, works the defense against Upperman’s Chris Nash, 00, during the Lions 73-68 District 8-AA win at Cannon County Monday night. Nave scored 18 points and had 10 rebounds in the win.
The special season Cannon County boys basketball players envisioned at the outset of 2010-11 is starting to materialize.

Cannon County upset perennial league power Upperman, 73-68, in a pivotal District 8-AA showdown to move within one-half game of the Bees for the top spot in the league standings at Robert A. Harris Gymnasium Monday.

It was the Lions' first win against Upperman since Jan. 7, 2003 and came on the heels of Cannon County completing its first regular-season sweep of rival DeKalb County during the same eight-year span three days earlier.

Cannon County players celebrated the monumental win as a partisan crowd roared its approval after the Lions dealt Upperman (12-7, 4-1) its first District 8-AA loss. The Lions (14-7, 3-1) regained control of their regular-season championship destiny as the league race nears the halfway point.

"It is still way early but Upperman has been the top dog every year so this means so much," said senior Justin Davenport, who led the Lions with 26 points and five assists. "We have not been able to beat them but tonight we refused to lose. This is probably the biggest game for the seniors, to this point, by far. We have to keep working. We can't settle for being satisfied with this. We have to keep going."

"This is huge," Nave said. "This win puts us right there at the top of the district and we have been fighting to get there for so long. This is a breakthrough win for us. Upperman has been up there at (No. 1 or 2 in the district) for as long as I can remember so to beat them is pretty sweet."

The Lions were guilty of just nine turnovers, three of which were offensive fouls, and maintained an up-tempo style.

"I am so pleased with how we handled the ball," Cannon County Head Coach Matt Rigsby said. "That had to happen. One of our keys to the game was 15 or less turnovers and that was a big, big key."

The hot-shooting Lions produced one of their most proficient offensive performances this season. Cannon County shot a sizzling 64 percent (25-of-39), including 55 percent (6-of-11) from 3-point range.

"We ran good offense, moved the ball well and found the open man.  We limited our turnovers and didn't cost ourselves possessions," Nave said. "We showed a lot of guts and came through in the clutch."

Nave is becoming Mr. Clutch and he saved his best for the most important time against the Bees. The senior shooting guard scored eight of his 18 in the final 3:08 after Upperman had come from behind to take its first lead. Nave was 6-of-8 from the field.

Nave delivered one crushing blow after another and Davenport put the final touches on the win by nailing 5-of-6 free throws in the final 27 seconds.

Although Cannon County had controlled the game throughout the outcome was in question until the final seconds, and when Upperman battled back to take its first lead, 56-54, with 4:17 remaining, there was cause for concern.

"There could have been reason for doubt, but there was none," Rigsby said. "The players showed a great deal of poise and played like a team that wants to realize its team goal of winning a district championship. These are the games you have to win in order to do that. We showed a lot of composure."

Ruehlen connected on two free throws with 4:17 remaining to even the score, 56-56. The Lions were dynamite from the line when it mattered most, nailing 11-of-13 in the final 4:17.

Nave came up with a block shot on the defensive end and then drew a foul on the offensive end, hit both and put Cannon County back on top for good, 58-56, with 3:08 remaining. After Cripps' offensive rebound and putback gave the Lions a 60-56 advantage with 2:45 remaining, Nave and Davenport combined for the final 11 Cannon County points.

"We just fought and fought and found a way to win," Davenport said. "The game got close and we pulled it out and that was not the case in the past. I was just happy to see the clock finally reach zero."

Cannon County won't have long to celebrate its win. The Lions face Bledsoe County in a non-district game at Robert A. Harris Gymnasium tonight before returning to league action at Upperman Friday.

Print
Members Opinions:
jar2h
[Delete]
Good win for Cannon boys. However, the refs should stay wherever the hell they came from. I have never seen so many blown calls or no-calls in my life. Keep the whistle out of your mouth and go chew on a dogbone.
[Delete]
Very good win last night for the Lions basketball team and Coach Rigsby.
awc96
[Delete]
Your right jar2h, it was bad, but it made the win even sweeter."Go Lions"!!!!!!!!!!!!!!!!!