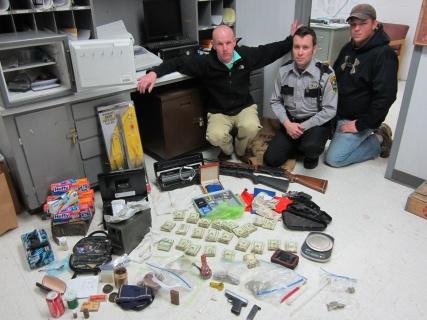 “It all started with a traffic stop,” said Investigator Brandon Gullet.

Jordan Scott Williams was discovered asleep in his vehicle by Deputy Travis Turney.

When Turney ordered Williams out of his truck a clear, glassine envelope fell out containing what was believed to be methamphetamine. A subsequent search discovered a loaded pistol, more meth and a leafy, green material that appeared to be marijuana, Gullet said.

“From that we gathered enough evidence for a search warrant,” Gullet said.

When the warrant was executed at Williams’ home on Parchcorn Road, a large quantity of drugs was discovered, the investigator said. More than $20,000 in cash was seized.

In addition to the cash, three trailers, two Honda four wheelers, five guns were also confiscated by the Sheriff’s Department along with burglary tools.

Williams also faces drug charges in Florida as well as in Coffee County where he is also expected to answer resisting arrest charges.

Also participating in the search were Deputies Jordan McGee and Andrea Damron.