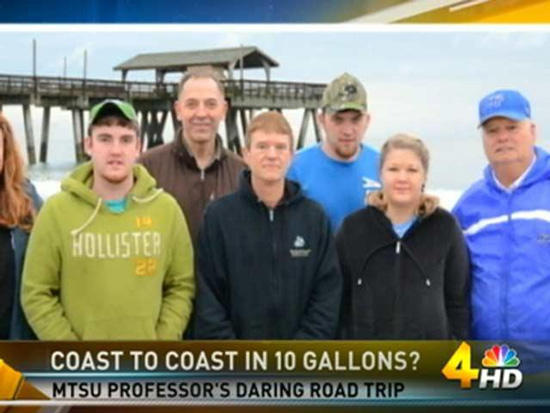 Front row in green hoodie is Travis Owen and next to him is Terry Young, both of Woodbury. (Channel 4 News photo)
MTSU professor of agriculture and alternative fuel research expert Dr. Cliff Ricketts achieved one of his career goals early this month driving coast-to-coast - from Tybee Island, GA to Long Beach, CA (about 2,532 miles) - using only 2.15 gallons of fuel purchased at the pump.

Ricketts idea sparked about 30 something years ago when the Iranian hostage crisis happened.  Following that gas prices tripled to a ridiculous 1.60 a gallon. Since I was in agriculture, I wanted to make a fuel alternative so in case of a national emergency, the American farmer could still harvest their crops.  We were scared about that several years ago so we started with our first alternative fuel...ethanol.  We then we moved forward to methane from cow manure and then to biodiesel and then to solar-electric.  But my passion and what I'm trying to work with now is hydrogen.

Ricketts and his team used three cars converted to use hydrogen for the daring trip.  The team filled each vehicle from a homemade refinery at MTSU using electricity from a solar panel for the electrolysis process, which splits hydrogen from water.  Originally, the team planned to take along a mobile refilling unit, so it could fill up the cars when they ran out.  But the equipment they ordered never arrived from Canada.  So once the first two vehicles (a 2005 Toyota Prius and a 1994 Toyota Tercel) ran down they switched to a 2007 Prius, which also has two 10-kilowatt-hour battery packs, and the ability to run off E95 (95%) ethanol.  Unfortunately there are no hydrogen filling stations along the way.

Ricketts and his team of assistants and two tow trucks began their coast-to-coast journey on Sunday, March 4th (in the pouring rain) driving from the GA coast to Murfreesboro, TN.  From there they headed west toward their destination, Long Beach, CA.  Thursday, March 8th, marked the end of the team's journey and Rickett’s goal.

At the beginning of their journey the team estimated that to drive coast to coast it would take less than 10 gallons of gas.  To their surprise and the boosting of their confidence they achieved the project using only 2.25 gallons.  So where exactly does the gasoline come in?  Ricketts says that according to U.S. law you have to have 5% gasoline in ethanol so that it's not a consumable liquid.  If we didn't we'd be transporting something we call "moonshine" or "white lightning" he joked, so the only gas we have in the fuel is what is required by law.  Ricketts and his team have had numerous interviews with TV, radio and newspaper reporters, including some that have aired live while they were driving cross-country.

Ricketts, 63, who is in his 36th year as a School of Agribusiness and Agriscience faculty member and his 34th year as an alternative fuel researcher, said he’s amazed that his goal has become a reality after so many years of study and compiling data.

"A lot of people talk but they don't do" says Ricketts. "We don't want to say, "We can do this, we can do that".  My team and I wanted to actually demonstrate that for certain we can go coast- to- coast on less than three gallons of gas and show there is an alternative to gasoline should we have to use it."  Ricketts next goal?  A coast to coast trip using ONLY power from water and the sun.