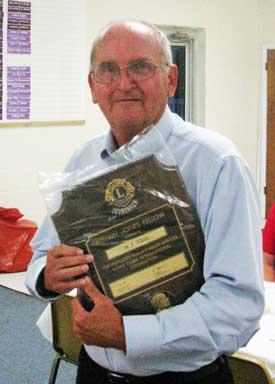 W.T. Todd
The Woodbury Lions Club would like to congratulate Lion W.T. Todd on being selected as a recipient of a Melvin Jones Fellowship. Lion Todd accepted his fellowship at the annual awards banquet hosted on July 26th, 2010.

The Melvin Jones Fellowship (MJF) recognizes donations to Lions Club International Foundation (LCIF).The Fellowship was established in 1973 and is named after the founder of Lions Clubs. It is the backbone of LCIF, providing 75 percent of the foundation's revenue.

A recognition of humanitarian work, an MJF is an honor presented to those who donate to LCIF or to people for whom a donation was made by others.

The Woodbury Lions Club made a donation to LCIF in Lion W.T. Todd's honor. Melvin Jones Fellows receive an attractive lapel pin, a plaque and a congratulatory letter from LCIF.