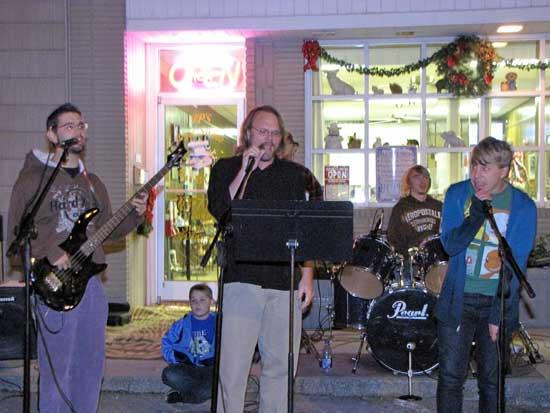 From left to right are Jake Wilder on guitar, Band Director Steven Porter (singing), on drums in background is Andrew Bullock and Chad Downing as they perform a song from the Kinks.
The City of Woodbury and the Historic Cannon County Chamber of Commerce once again had their Annual Merchants Christmas Open House and the town was full Friday night. You could see just about anything that you wanted to from antiques to a live band in front of the Fine Swine BBQ Restaurant. The band seemed to have their own fan club on the square listening to them. There were antiques, jewelry to pictures with Santa at the Cannon Courier. And just about anything you wanted to eat.

The band named JRB for Jazz & Rock & Blues was playing for the crowd on the square. The JRB is the Cannon County High School's rock band that is sponsored by their band director Mr. Steven Porter. Steven has done wonders for the band at the high school and is probably their biggest fan. I know the kids love and respect him.

This night Mr. Porter sang the new rendition of the old Kinks hit “You Really Got Me” which if I remember correctly came out in 1965, probably before Mr. Porter was born. He not only teaches the students, he performs with them. He gives the kind of encouragement that teenagers need, he sets the example and believe it or not he sounded good.

I have been observing the CCHS Marching Band ever since Mr. Porter took over and they just keep getting better and better. Outside of my house on Houston Lane I hear the Marching Band practicing under the Osage Orange tree (bow dock) and have enjoyed the cadence that comes from their drums in the afternoon. As a resident of Cannon County I am proud of the way the band performs at all our functions.

I think that the school system has prospered under the tutelage of Steven Porter and we should watch him in years to come. He is getting the band ready to perform for the public and at private gatherings. If you have a chance to get to listen to them, take the time to hear them play.