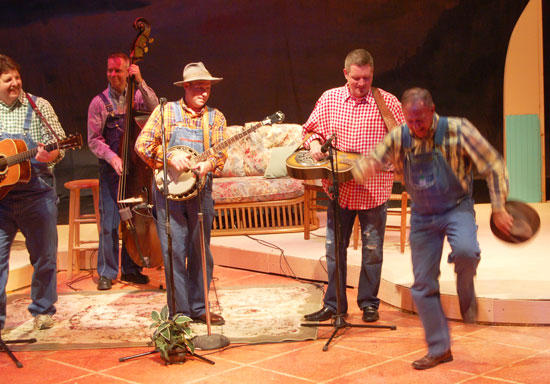 Lonesome Lester Armistead brought the house down when he began an impromptu buck dance recently to entertain the audience at the Arts Center. Jug Band members from left are Mike Armistead, Andy Todd, Leroy Troy and Dan Kelly.
Not one, but a record four times, The Tennessee Mafia Jug Band has filled the nationally-acclaimed Arts Center of Cannon County with fans and laughter.

Enter the “Agitator,” from stage left.

“That scrub board sounds like the cicadas and that screeching noise we hear outside these days,” judged audience member Ben Northern from Murfreesboro.

“The cicadas do sound like a weed eater,” agreed Troy from behind his famous “Tennessee Slicker” grin that’s helped make him into one of country music’s performing comedic icons not seen since the likes of late great Uncle Dave Macon, who operated a mule-hauling business between Woodbury and Murfreesboro before becoming a national star on the Grand Ole Opry when it was spawned back in the 1920s.

“Despite our corny jokes, they keep having us back,” noted Troy confidently as he tuned up his “Agitator”…a combination scrub board, multi-horned, cymbal-clanging contraption reputed to perform only in the “key of A.”

“We’re five guys and a scrub board with roots in old timey country music like wisdom teeth,” Troy told the packed-out audience.

So funny, a spectator in third row reportedly laughed so hard, that she “had tears running down both legs,” Jug Band senior performer Lonesome Lester Armistead assessed as Leroy let out a forlorn-sounding roosters’ “crow” in a soul-touching, barn-yard-quality rendition of “Ghost Chickens In the Sky.”

The song brought the house down with laughter.

“This frolicking fivesome brightens up the stage with rib-tickling old time favorites,” assessed program emcee Hatch in introducing the throw-back in time Jug Band. “Yes, they tell corny jokes, and even do slap-stick gags that throw Cable TV-numbed audiences into hysterics.”

“But they keep having us back,” Troy defended as his right-hand moved in a clawing blur on his mystical banjo.

“We don’t miss a performance of Leroy Troy, and the Jug Band,” echoed Cannon County resident Frances Foster. “We’ve known Leroy for a number of years, dating back to my clogging group days. He’d come up, hang out and help make music with us.”

History echoed throughout the performance as the Jug Band’s fiddle-playing Dan Kelly rebirthed the soulful style of music played back in the 1930s and 1940s.