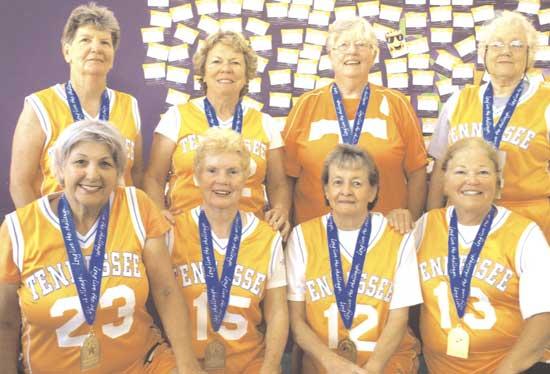 In the world of sports, one thing that Cannon County is known for is its basketball.

Mary Jones Kelly played four years at Auburn High School on the basketball team and graduated in 1958. Now 51 plus years later she is still playing. Her team the Tennessee Amigos just won a national championship.

The 65-plus team that won the title was actually an all star team from Tennessee. The Smoky Mountain Mamas of Knoxville captured the gold medal in the state, but were combined with the silver medal team, the Tennessee Amigos, to form one all star team to take to the nationals.

Stanford University in Palo Alto, CA was where the games were held. The Amigos not only won the gold, but went undefeated in the nine games played Aug. 4-6. They defeated the defending national champions of 2007 the Michigan Spirits 29-27, in overtime.

In the Final Four the Amigos met the Connecticut team again and defeated them 29-20. In the championship game against Michigan, the battle went to overtime with the Amigos won.

The Tennessee Amigos were honored to wear donated uniforms which once belonged to the Tennessee Lady Vols.

"Long Live the Challenge" was the slogan for the 2009 National Senior Games, founded in 1985. Promoting healthy lifestyles for adults over age 50, the event is the largest multi-sport event in the world.

Kelly loves the hardwood and the game of basketball. During her high school days she played guard-defense. Her offensive skills have developed and she averaged double figures in the nationals.

She also feels fortunate to have the health and ability to be competitive and attributes much of it to the work ethic learned growing up on her family's farm in Auburntown. The guidance provided by her high school coaches Jerry Gaither, William Sadler and the late Charles Lemay will long be remembered.

Other than competing whenever time allows, Kelly enjoys helping with Upward Basketball. It was an honored to be asked and she is on the board of directors of Upper Cumberland Fellowship of Christian Athletes.

The Women's Basketball Hall of Fame in Knoxville has recognized the Tennessee Amigos and have a display honoring them in the rotunda. The Hall of Fame's motto is: Honor the Past - Celebrate the Present - Promote the Future.