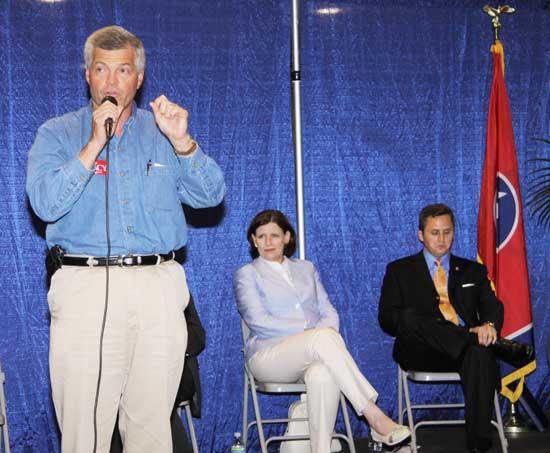 Republican JIm Tracy said securing the Mexican border is a No. 1 priority.

MURFREESBORO - Nine of the 17 candidates battling for the hotly-contested 6th Congressional District seat expressed strong opinions and shared views during a two-hour political forum at the Tennessee Livestock Center Tuesday night, but the most vocal was Tea Party Democrat George Erdell.

More than an estimated 300 attended the 6th Congressional District Political Forum, sponsored by the MTSU School of Agribusiness and Agriscience and the Rutherford County Farm Bureau, that included a five-minute introduction from each of the candidates present, followed by a one-hour question session.

The race has included tough jabs and some negative campaigning and the hard hits kept coming Tuesday night as Democrats and Republicans made final pitches stating their case to win a seat Democrats have held since 1982 when Al Gore won.

Erdel drew the ire of the crowd with his grilling of Democratic foe Leming. At one point near the end of the forum a person in the audience yelled, "Why are you a Democrat? Go join the Tea Party," as Erdel was starting to speak.

Erdel declared that he was "your grandfather's Democract and Leming is the (Nancy) Pelosi current day Democrat," which did not sit well with an audience that had a strong contingent of Leming supporters.

The outspoken Erdel even suggested an unwanted horse for an old Mexican was a "fair trade." Questioned about their stance on unwanted horses and horses for slaughter, Zelenik mentioned people were even taking unwanted horses to Mexico and leaving them.

Erdel fired back that "an unwanted horse for an old Mexican" was a fair trade in reference to earlier commentary on illegal immigrants.

When asked their opinion on the health care bill, Erdel followed Leming's suggestion that the leaders move forward and not go backwards (looking to change) with a strong "it was put in against the will of the American people so let's repeal it."

"I am opposed to government taking care of our health care. It's ridiculous." Zelenik said. "Government is coming into patients and their families and their most important rights."

Aside from minimal verbal jabs dashed throughout the candidates stuck to the issues during the two-hour forum. Issues and questions ranged from unwanted horses to illegal immigrants with the economy, health care and a bevy of others sprinkled between.

Illegal immigration was a topic that drew a mainly unified stance with the candidates.

Tracy said sealing the border was a No. 1 priority.

"We need to penalize people who are hiring illegals," he said. "At $10,000 per day, per employee it won't be long that they will not be hiring them."

Zelenik said illegals are costing America "$113 billion. We need to put our people to work, not illegals," she said. "It starts with enforcement and securing our borders. Seventeen percent (of illegals) coming across have criminal records and it is a national issue."

"We have laws on the books that are not enforced," Erdel said. "We have the laws. Enforce the damn things."

Tracy said the "country is on the wrong track ... but we can turn this country around starting right here in the Sixth District. I'm an optimist and I know we can get this country back on track. We have to get back to the basics, starting with our economy. We need good common sense in Washington," he told a partisan crowd of Tracy supporters.

Erdel said there are too many "cheap political harlots," in Washington.

"They are political prostitutes selling themselves for the benefit of political pimps," Erdel said. "I promise you when I get there my first vote is to get (Pelosi) out of the Speaker's chiar and you can count on that."

Roberts said today's leaders "are pushing us toward bankruptcy."

"If we want the same problems in Washington then we keep sending politicians to Washington. We have to stop that," Roberts said.

Carter said voters in the 6th Congressional District are tired of "career politicians."

"Two years ago we kicked all of the Republicans out and put Democrats in charge and now we are saying the reverse," Carter said. "We need qualified people to stand up and lead, that's what we need. That's how we move our country forward."