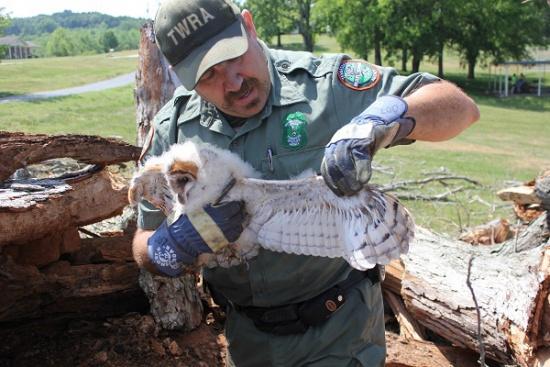 Wildlife Officer Mark Vance showing the wingspan of one of the baby Barn Owls. (BOB STOETZEL photo)
Families separated, children misplaced, fathers not around. How many times have we heard this story? All too many times I am sorry to say. And this happened again on April 28 in Woodbury.

Actually I wanted to write a story that piqued your interest like the one the headlines depict, but I just had to stop because what could have been a tragedy turned out to be a victory because we as humans are compassionate when it comes to animals. That is right, I said animals. The story you thought you were going to read about is actually a story of a family of Barn Owls.

Let me start from the beginning. Sometime that week Woodbury Chief of Police Kevin Mooneyham went to Mayor Harold Patrick with a safety problem. It seems that a rather large white oak tree in Brown Spurlock Park had completely died and was becoming a hazard to the motoring public and the people who use the park on a daily basis. The tree was situated in the park just in front of Bobby Smith's house and was hanging over the roadway.

Chief Mooneyham was seeking permission to have the tree removed; the mayor okayed the request. A man was tasked with cutting the tree.

Junior McVeigh cut the tree down on Saturday morning. When the tree fell it broke apart about midway through and revealed a nest of young owls, the mother flew away. Thus we have the city destroying a house. There were three male owls not yet able to fly and then the mother which made four, a family of four.

Chief Mooneyham called the local Tennessee Wildlife Resources Agency (TWRA) Officer Mark Vance (this is where the state gets involved). Officer Vance came to the scene and asked if anyone could take pictures so Chief Mooneyham called me and that is why I am writing this story of you how the Woodbury Police, the Town of Woodbury, the State of Tennessee and the Middle Tennessee Electric Company ended up together on a beautiful Saturday at the city park.

Barn Owls, as was explained by Officer Vance, are our friends; literally they are responsible in a major way in keeping down the rodent population around where they live. They are very good at what they do. Vance explained to my wife Teresa and the others there that the Barn Owl doesn't "hoot" and unless communicating, they don't really make that much noise.

However, when captured by this wildlife officer these birds that don't say much really screamed up a storm. I was afraid that the mother would be dive-bombing us at any time and started looking around. But Officer Vance said that the Barn Owl is not really aggressive, plus these were fairly large baby owls approximately two months old. They still had the white baby feathers (see pictures) and were about three weeks from flying according to Officer Vance. Even at their size they were still prey for the ground animals if left where they were found.

Officer Vance boxed them up and was taking them to Walden's Puddle, a rehabilitation center for wild animals. When the owls were able to take care of themselves they would have been transported back to Woodbury to be released. But then the Center and Officer Vance decided to take another direction. They decided to bring the babies back to Woodbury and put them up in an Owl House. This is where MTEMC became involved.

John Barker and Darryl Snyder from Middle Tennessee Electric brought their bucket truck to the park. Darryl hoisted the box up with the boom and fixed the boxed (which was painted camouflage) and then one by one he lifted the boom while he was holding a single bird and put them all into the box. This was done so that when night came and the chicks became hungry and the mother who was no doubt nearby, would hear their shrieks and fly to them, and they would be reunited and life as they know it would continue.

A neighbor, Bobby Womack stated that he had seen the mother several times who is a beautiful stark white owl. Officer Vance said the mother had gathered a vole (mouse-like animal) for the chicks and left it inside for them to eat. When the chicks are young the mother catches the food and strips it off in pieces to feed the young.  As they grow older she will bring in the animal and let them kill it and feed themselves.

Whenever we as humans see people in need we will usually help. And if children are involved our emotions run high because we then think about how helpless they are and just naturally want to help. That is what brought these people and a corporation together on a beautiful Saturday in April.

If you haven't met Officer Vance you should take the time to meet him and talk. He is really knowledgeable about his work. He told us so much about the owls and the tree. He found the tree to be over 200 years old according to the growth rings and he also found that probably for the last 70 years water had gotten into the inside of the tree and made it start to rot. There were several people who expressed themselves at the loss of the tree to the park. Some things you cannot control.

Officer Vance is also responsible for getting the riverbank cleaned up so we can hold a fishing rodeo in June for the kids. This is what happens when people get involved and look for that which will benefit everyone.

I thank John Barker and Darryl Snyder for their efforts to save these beautiful birds, which, without their help and bucket truck this, could have turned out a whole lot different.