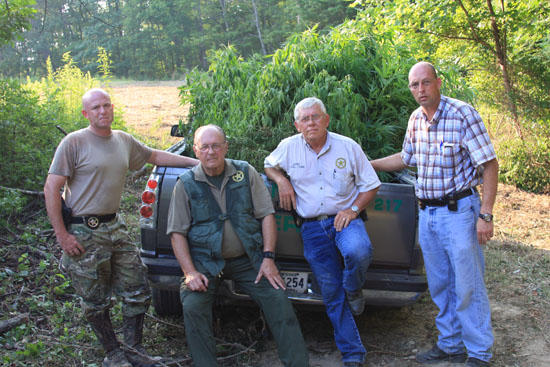 Four persons have been charged by the Cannon County Sheriff’s Department in connection with a marijuana growing operation.

Three of the four have also been charged with possessing a moonshine still.

The pot growing and still operations were found at 4501 and 4545 Big Hill Road in Liberty on Monday, July 11.

Investigators Anthony Young and Mike Cawthon said the marijuana was observed during an aerial surveillance of the area during a followup investigation of a nearby pot-growing operation which was busted on Saturday, July 9 on Payton Lane.

124 marijuana plants, valued at $124,000, were found on the properties along with the moonshine still and a barrel full of sour mash whiskey.

Facing charges stemming from the investigation are:

Edward A. Johnson, for manufacture of marijuana, possession of a still, possession of drug paraphernalia and theft over $1,000. Johnson had in his possession a Cub Cadet lawnmower valued at over $2,000 which was stolen from Canada.

All four are scheduled to make their initial appearance in Cannon County General Sessions Court on Sept. 6.

Print
Members Opinions:
TnTnTn
[Delete]
Isn't this about the 3rd time for these same persons at the same place in the last 3-4 years? What was the disposition of the previous cases? Looks like the 'justice system', or lack of it, is not much of a deterrent. TTT
[Delete]
It is a deterrent to people that pay attention, unfortunately they feel the money they make illegally is worth the risk.
ftenpenny
[Delete]
Bob I agree money makes the difference,I still think that bringing back the chain gang might make a difference using the sling blades for 11-29 can adjust most peoples outlook on life.Park the county tractors,train the opertors to work prisoners send them out rain or shine It is time to get tough. I am tried of my taxes being wasted.Judges make a example an try to slow down this run a way train.Sheriff get tough an you can lower you head count.