Sheriff: No Leads, Clues
In Search For Missing Youth 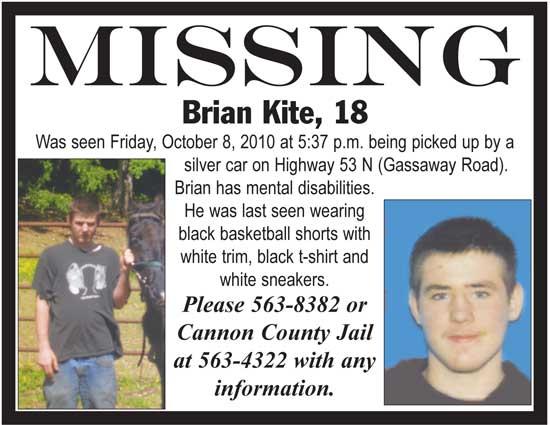 Members of the Cannon County Sheriff's Department have spent the last two days actively searching for a local youth who has been reported as missing.

However, as of Tuesday morning, the whereabouts of Brian Kite, 18, remains a mystery.

"We've had no clues, no leads," Detective James Davis said, "only a lot of rumors."

Kite's family reported the young man missing on Sunday. He was last seen Friday evening getting into a silver car on Highway 53N (Gassaway Road).

"We went out looking Sunday and Monday and we are following every lead we can find," Sheriff Darrell Young said, "and we will continue to look until we locate him."

Sheriff Young said anyone with information about where Kite is or may be should call the sheriff's department at (615) 563-4322.