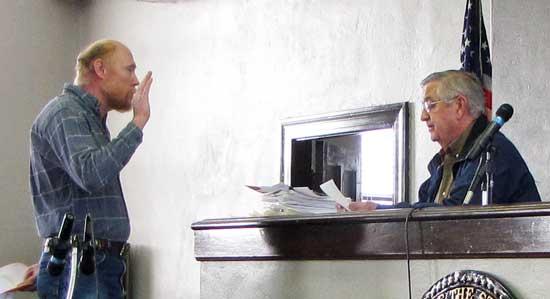 Tony Neal, one of two persons nominated for the position, won the vote of commissioners by an 8-1 tally. Neal was immediately sworn in as a commissioner following the vote.

The only other nominee for the position was Glenn Steakley, whose name was put forward by Third District Commissioner Kevin George.

Neal will hold the seat on an interim basis until the next county election, which will be held in August 2012. That election will decide who serves the remainder of Wimberly's four-year term.

In other business Saturday the commissioners:

• Passed on first reading, by an 8-1 vote, a resolution offered by George to removed the law enforcement powers of Cannon County's constables. The resolution does not call for the elimination of the office. A two-thirds vote of the 10-member commission is required by state law in order for it to pass. Also, commissioners must pass the resolution again, at its next quarterly meeting in April, before it takes effect. It must also pass by a two-thirds vote on second reading. Commissioner Todd Hollandsworth did not vote on the resolution.

• Voted down, by a 7-2 margin, a motion by Commissioner Russell Reed to permit Sunday beer sales in Cannon County. Russell, who owns Russell's Market, did not vote on the resolution. Commissioners Jim Bush and Kevin Mooneyham voted to approve the motion, while Mark Barker, Jimmy Mingle, Hollandsworth, George, Higgins, Neal and Bob Stoetzel voted against.

Following that vote, Bush made a motion to place the question of allowing Sunday beer sales on a referendum for the next election (August 2012). That motion passed 6-4, with Barker, Mingle, George and Higgins voting against.

• Rejected a motion made by Mingle to opt into the State Fire Marshal's residential building codes program. The motion failed 6-4 as Barker, Hollandsworth, George, Bush, Higgins and Neal votes against passage. Failure to approve the motion means that Cannon County is no longer eligible for a $100,000 state grant to improve energy efficiency at the Cannon County Courthouse.

• Approved a motion by Stoetzel to form a county audit committee. The committee will perform in an advisory capacity and make recommendations to help address adverse findings in yearly audits conducted by the State Comptroller's Office. County Executive Mike Gannon said the Comptroller's Office must first approve the county's plan to form the committee, and he said he will submit one to the state before the commission's April meeting.

• Took no action on a request by local attorney Dale Peterson to rescind the $30 litigation fee the commission imposed on court cases at the October meeting. The fee is earmarked for jail and courthouse improvements. Peterson maintains that the fee is unfair on civil and juvenile court cases, but is for criminal cases. "You are adding an additional tax on people who are being taxed already," Peterson told the commissioners.

See the Jan. 25 edition of the Cannon Courier for more information from Saturday's meeting.

These constables were ELECTED by the VOTERS with these specific powers and duties in place. How dare the County Commission now just decide that they want to change the duties of this elected office. The liability issue is mute because the County has liability insurance to cover them just like any other elected official. Since Cannon County is still a very rural area there are many sections of this county were there is NO visible law enforcement and it would take a lot of time for police to be dispatched and arrive on the scene. If there is a Constable that lives in the area and can be called to arrive in a short time, it just might prevent a bad situation from happening - Just Common Sense, folks!!! And this help is on a VOLUNTEER BASIS. It is not costing the taxpayers money.

I wonder why pulling the Constable's powers is so important to some of the Commissioners. Could it be a personal vendetta? Come on grow up and get over it and think what is best for the citizens of the county - who by the way elected all you Commissioners.

If this issue is to be persued, it should be done at the next election for these constables. At that time you can either do away with the office altogether or change the listed duties and powers BEFORE these people are elected by the county citizens.

Cannon County has a whole lot more important issues for the Commission to be worrying about than trying to reject very needed VOLUNTEER services. I think the citizens should be up in arms over this blatant abuse of power because of personality conflicts by the County Commission.

[Delete]
Mellanie...now where on the agenda did it say the commissioners would vote on a resolution for Sunday beer sales and where did it say they would discuss accepting or rejecting the State Fire Marshall's residential building code that could result in the county losing $100,000 in grant money? I understand about having to "read between the lines" but neither of these two items covered in the advertised agenda.

That said, for those who believe in greater transparency and notification of planned activities on the part of government officials, too many matters were brought up and decided on under "other business" — Sunday beer sales, an audit committee and removing law enforcement powers from constables to name three.
[Delete]
Well said Kevin.

"Other Business" is too vague and to widely used to bring up items that require that much attention and that much discussion.

If "Other Business" is the category that must be used, then I suggest it look like this:

If used like this, then the transparency is not an issue.

If whoever is responsible for the agenda would like to respond, feel free.
srpowers
[Delete]
At the risk of sounding redundant maybe peole ought to research for themelves the laws governing constables and realize that the commissioners where doing exactly what we PAY them to do protecting us from over zealous constables!

[Delete]
srpowers please read my last post under the poll. You will see that I did a little reasearch and I have a somewhat different opinion now.

Thanks!
[Delete]
Amen and pass the biccuits you hit right on nose mr srpowers good job
srpowers
[Delete]
Corey, I'm glad to see that someone has taken the time to try and understand what has brought this own. I have both witnessed and heard of acts performed by a "certain" constable of the county and am for one glad that the commisioners has taken steps not to get rid of the constables but just prevent this from happening again.
[Delete]
I do not know of any particulars of a "certain" Constable, nor do I really need to.

I still think they are under utilized, but I do understand more about the issue now.

Constables can be a good thing. I just think everyone needs to understand their roles and responsibilities a little more clearer.
[Delete]
Searching for peanuts while losing grant opportunities. Where are our priorities?
jimgibbs
[Delete]
Steve – You contacted me asking about the duties of constable before the filing deadline and you were considering running but didn’t – You didn’t like that particular person before he was elected but didn’t make an effort to run against him. Just because you don’t like that particular constable, or “you think” he is doing something wrong, don’t attack every constable in general – they --- we don’t deserve it. You have a lot of your facts wrong --- and I’ll leave it at that – I personally value you as a friend and wish you would shoot your prey with a .22 not a shotgun.