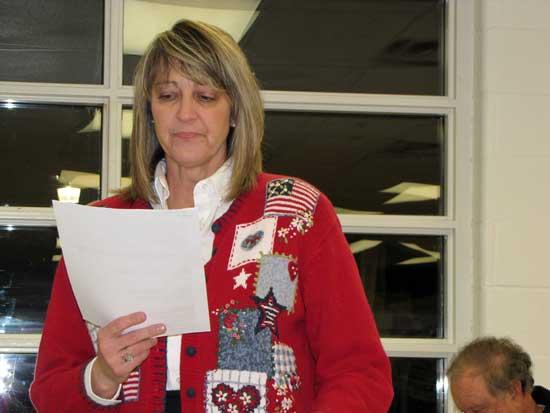 Connie Foster, Director of Coordinated School Health, addressed the board about the changes to the Student Wellness Policy. She recommended they approve the following revisions:

1. Fundraising activities that involve the sale of low-nutritive snacks during the school day are prohibited.

2. Cannon County students will not be allowed to bring outside drinks into any Cannon County School during the school day except in lunches brought from home. Elementary students may provide an empty, clear container from home to be filled with water at school.

3. Energy drinks, energy gum, energy mints and all other energy products are banned from all Cannon County Schools.

4. Four class or club food parties will be allowed per year. Food parties/celebrations may not take place during the breakfast or lunch program or one hour prior to the lunch program.

Board member Shannon Davenport made a motion to approve the changes in the Wellness Policy, with a second from Chris Blackburn. All members voted aye.

Director Parker told the crowd of spectators that Cannon County Schools was really represented well in the recent State Beta Club Competitions. She announced winners in certain state competitions from all grades and all schools. Parker also announced that a Short Mountain youth ran for State Jr. Beta Club vice president and won that position, her name Macey Williams.

Teacher of the Year for Project Learning Tree was Stacey Francis Bryson of Short Mountain School. The Learning Tree is a multidisciplinary environmental education program meant for our educators and students. There are over 500,000 teachers over the US and abroad that are participants in this program and over 26 million students.

It was at this time that the meeting was called to order by Chairman Gannon. He started by welcoming everyone who came to the meeting. The board approved the minutes from the last meeting. They also approved this meeting’s agenda.

Also on the agenda was Ms. Katelynn Pastor. Ms. Pastor was the Account Executive for the Schnieder Electric Company that specializes in energy audits for their clients. They have done an audit of the school system in Cannon County and they show that the first year the savings for the school system would be $83,000. Ms. Pastor says that they actually believe the saving would be $100,000 but they wanted to be conservative in the initial presentation. The current cost of the schools system is $487,895.00 a year. In the contract the company would pay the school system the difference if they do not realize the $83,000.

Questions were asked by the board members Hyatt and Davenport about the subcontractors that would be doing the work, Mrs. Davenport asked this question because they wanted the company to make sure that there are no short cuts being taken by these contractors. And if there was something wrong who was going to be held liable.

Ms. Pastor said that they want as many local contractors to be used, but the company (s) they use will have to operate at Schneider’s standards under Schneider’s time lines. The subcontractor would be held liable.

Before entering into this contract with them which seems to have value to the board, member Hyatt wants to table this to the next meeting in January 2010. All of the members agreed that it should be postponed to give them time to look further into this.

• Marcia Melton addressed the board about some of the students that are going to be participating in online algebra courses. They have already picked the eighth grade students according to their grades. This project would also find out whether or not they could learn online. These students would be required to work online for 10 to 15 hours a week; this is over and above their regular math school work. Mrs. Melton said that they are not penalized academically if they opt out. But if they do complete this and do well they will be getting one credit for their work.

Mrs. Melton also advised the board that the Tennessee Supreme Court is going to try some cases in Murfreesboro in February and have invited Cannon County students to sit in on them. This is an opportunity that many are looking forward to.

• Connie Foster recognized the school system's health partners. One such partner is from MTSU, Cannon County has partnered with their health and wellness department for years. Another partner is Sandy McBroom Bogle, a retired Dental Hygienist and a Central High School alumni. Next was Debbie Sullivan; Sullivan is a professor at MTSU School of Nursing program and has been for 30 years. She comes and administers the screening of the body fat index on the students. Another partner is Carl Hirlston. Hirlston represents the Woodbury Lions Club on visual matters with the school system. Director Parker says that the students really appreciate all the Lions Club does with them.

• Parker addressed the audit report. The auditors say the Central System of Accounting is not uniform across the county. There was not enough segregation of duties (more than one person needs to be involved), writing checks needs to have two signatures (a recommendation). The report shows a need for accounting of all the schools property, the Director says that has been taken care of and all the property has been listed.

• “Operation Race to the Top” is a program from the federal government and it has $150-250 million set aside for Tennessee. Parker told the Board that a deadline is soon coming to where Cannon County will have to sign a Memorandum of Understanding (MOU) to even be considered to be a recipient of some of the grant money. Later if it is found that the school system does not want to participate in the program they won’t have to, but they would not receive anything from the grant. Art Patterson of Tennessee Education Association (TEA) addressed the board at that time and told them that this would be a partnership and that the TEA is very much excited about the chance of being a partner with the Local Education Agency (LEA). He was there tonight to urge the school to sign the MOU. The MOU is different to a Memorandum of Agreement which is a binding contract. Parker wanted the board to know that she would be signing the MOU.

• Tim Knox had requested time in front of Board about painting the inside of the High School gym. He told the board he wanted to bring it to their attention at the January meeting.