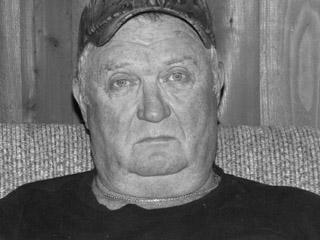 By Bob Stoetzel
Writers' note: Medford (Med) Foster died in the first week in June 2013. He was married to the former Lynn Davenport (Hoppy's sister) for almost 40 years. I saw her at Woodbury Funeral Home for visitation and asked her if I might re-print the veteran story I did on him in 2009 in the Cannon Courier. Lynn gave her permission and also thought it would be another way more people could know her husband. The following story was given to me by Medford for our veterans day activities in a publication called "You don't always see the scars" November 2009. His wife told me during the interview with Med in 2009 and then again at the funeral home that he didn't talk about Vietnam much at all, even to her.

Medford Carl Foster Jr.
The Seabees are the Construction Battalions of the United States Navy. The Seabees have a history of building bases, bulldozing and paving thousands of miles of roadway and airstrips, and accomplishing a myriad of other construction projects in a wide variety of military theaters dating back to World War II, such as temporary bridges to cross rivers.

I had a chance to talk with Medford Foster of Doolittle Road last week and discussed his time in the Navy as a Seabee. Med, for short, was born 10-11-1946 to Medford Carl Foster Sr. and Lota Rigsby Foster of the Leoni Community. His father died when he was seven years old. His mother later married Delter Lois Tenpenny, everyone called him Lois. Lois was a farmer in the Leoni Community and also had some land over Warren County which they also farmed. Lois died while Med was in the service and to this day he will tell you that his daddy was his best friend.

"It isn't like it was when we were in Bob, Med says. Back then we didn't come home and let everybody know that we were in Vietnam. I wanted to forget it." He is right, it really wasn't a popular war; too many civilians were hitting the streets protesting the things that were going on over there and taking our leaders to task. But as all Americans have been throughout our history they did their duty, they did what was asked of them to do.

Med remembers his daddy sitting on the front porch steps crying because he knew his son was going off to war. Med says as soon as he got his draft card his daddy had told him that he would give everything he had to keep him from going off to Vietnam. "He wasn't dirt poor but he didn't have much, and he was going to spend it to keep me from getting hurt" Med says as he stopped and apologized for the tears he had in his eyes and his cracked voice. This hurt Med, but Med told him that he was going into the Navy to do his duty. Med knew all he had to say was ok and his dad would have fulfilled his promise and Med did not want his dad to sacrifice everything for him.

Med enlisted on March 30th, 1966, he and Jack Barton from this county were in boot camp together in Great Lakes, Illinois. Med said that he was on the delayed enlistment for 90 days so he could help his daddy get the crops set out.

Scared
Med landed "in country" at Da Nang Airport and then traveled through a village that was called Dog Patch and then on to his base. The route took them through a couple of mountain ranges. He told me that he was scared to death; in fact he never smoked cigarettes until he went there.

"He said why not he was probably going to die over there anyway" he laughed. But truth is told everyone he met thought about death more often than not. The man that he replaced in the unit was killed while on security watch. Everyone had to stand security watch. Med felt alone and he felt like a target. When the Seabees ran heavy equipment the enemy would open fire on them and then they would leave the seat and take cover behind the machine. He said that after a lot of requests they got some heavy duty hardware in the form of 88 MM Cannons. He said it was a good day when they showed up and a better day when they left, because when the cannons came so did the enemy. Med said after a fierce fight with the enemy once they counted 151 flat tires on their trucks and loaders.

When you are over there long enough you start reading the habits of people. Med said that when one of the big trucks went toward Da Nang and came back it was always loaded with the villagers hitching a ride. But when you saw the truck come back empty you knew you were going to get a visit from the enemy.
Med operated a scraper and the rock crusher. He said it wasn't his shift and the area where he was had come under attack and his friend was on the rock crusher when it exploded killing him. "These are things you can't forget, you can't get them out of your mind" Med said.

H.A. Foster
Med's younger brother was born in 1949, his name was Hershel Austin or H.A. as everyone called him. H.A. graduated in the class of 1967 at the old high school. H.A. would follow Med into the service but it would be as a soldier. Med said that he had left Vietnam and was in California for some training when he found out that H.A. was coming in from Germany and was then headed onto Vietnam. H.A.'s rate or MOS was as a Demolition Expert, so he would be defusing land mines in the jungles of Vietnam.

Medford said that there was talk about sending a unit of Seabees back to the same place that he had just left. So Med said he took the second tour in Vietnam to keep his younger brother from having to go there. H.A. was furious with Med, it was not really that H.A. wanted to go to Nam, but he hated Germany with a passion, according to Med. "I told him I didn't care if he was mad at me, I didn't want him to go over there."
It ended up that Medford didn't have to stay the whole year in Vietnam the second time and he left the service in July 1969.

Back home
Med said that when he came back to Cannon County everything was different for him. His mother had married once again and moved up to Michigan with her husband. Med grew his hair long, but don't think he was a hippy, he just wanted to do it and he didn't care who liked it or didn't. He said "some people would come up to him and say why don't you join the military; they will cut your hair short. I just answered him "no thanks, I was in Vietnam two times." I asked Medford didn't they know you were in the service? I mean Cannon County is small, he said when he was young and lived in Leoni he came to town two times a month and that was to get a haircut. He stayed on the farm so he didn't know many people.

Medford's' brother H.A. died of a heart attack in New York City in 1990 while unloading his truck. Medford was devastated. Medford said after his mothers' husband died in Michigan, she decided to stay up there. He said his brother looked at him and said "I guess all we got is each other". Medford loved his little brother. When his mother did come back home she lived right next door to Medford and Lynn up on Doolittle. She died this year (2009) and Medford feels alone, but he says that the Good Lord has blessed him with a good wife and two daughters and grandchildren and right now that is all he needs.

Medford received the National Defense Medal, the Vietnam Service Medal, and Vietnam Campaign Medal with Fleet Marine Combat Insignia. All the loved ones and comrades who died whether in war or just in life Medford kept them inside to himself, but sometimes their memories come out and when they do, they are in the form of tears.