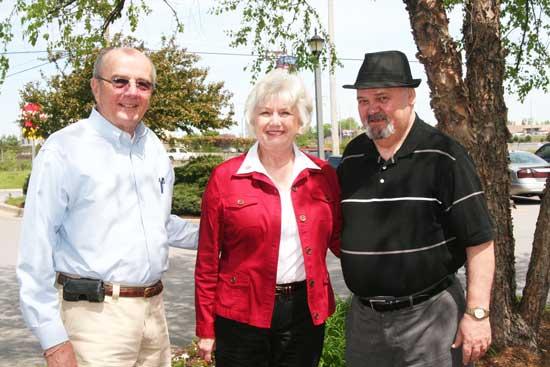 “We’re honored to announce Mr. Penuel’s and Mr. Whittle’s commitment to spearhead fund-raising efforts for construction of a vitally-needed Fisher House in Rutherford County,” confirmed Tennessee Fisher House Foundation President Andrea (Andy) Lawrence of Nashville. “The Fisher House will be on grounds at the beautiful York hospital campus on U.S. Route 231 North between Murfreesboro and Lebanon…”

A Fisher House, constructed with 20 bedrooms and bathes per building, is a unique private/public partnership that supports America’s military veterans in their time of medical needs. The concept has been described as similar to Ronald McDonald houses located near hospitals in major cities across America. Ground-breaking is scheduled this year.

Semi-retired Cannon County physician Leon Ruehland, who has long record of service to veterans, said having a Fisher House at York VA would be both “therapeutic and logical.”

“Anytime there’s loved ones close by aging and ailing veterans, it helps them to heal from their wounds and illnesses,” Dr. Ruehland prescribed.

“Most importantly, the program recognizes the special sacrifices of our men and women in uniform and the hardships of military service by meeting a humanitarian need beyond that normally provided by the Department of Veterans affairs,” added Penuel, retired Public Affairs officer with the Tennessee Army and Air National Guard. “Our mission is to help raise an estimated $3 million from the public and corporations as Tennessee’s share of $6 million total cost to serve ailing veterans and families.”

“As Americans, we’re not patriots if we don’t do everything we can to accommodate military veterans with health care during and after active military service to ensure our nation’s continued freedom,” added Whittle, well-known writer and newspaper retiree in the region. “A long-term stay for families, sometimes thousands of miles from home, can wipe out a military family’s limited resources.”

How important can a Fisher House be to current VA patients?

Latest figures show that more than 100,000 seriously-sick veterans, including modern-day soldiers and veterans from the past, come annually for medicine and treatment at the VA hospital in Nashville and York VA, named for the late Alvin York, legendary Tennessee native and America’s most famous soldier of World War I.

“This is the only Fisher House scheduled to be built in our great Volunteer State,” described military veteran Penuel,  former administrator of elections for Rutherford County. “We will be announcing multiple fund-raising efforts throughout the region.”

Fisher homes enable America’s military families to be together during extended treatment for serious illnesses and lengthy treatment periods.

The co-chairs have a track record of charitable causes ranging from Penuel’s involvement with United Way of Rutherford/Cannon Counties to Whittle helping establish a Room in the Inn in Murfreesboro to Whittlemania, a former charitable cause named for him that resulted in 17 Habitat for Humanity homes being constructed in La Vergne, Smyrna and Murfreesboro.

Whittle, before his retirement in 2006 due to health issues, helped lead a crusade in the Daily News Journal durinhg the 1990s to keep the Veterans Administration from closing the highly-utilized York VA facility and services.

Persons wanting to make tax-deductible donations can do so by mailing to Tennessee Fisher House Foundation, P.O. Box 774, Brentwood, Tenn., 37024-0774.

Whittle can be reached at 459-7650 and Penuel at 347-1672 for scheduling presentations to churches, civic clubs and school groups.