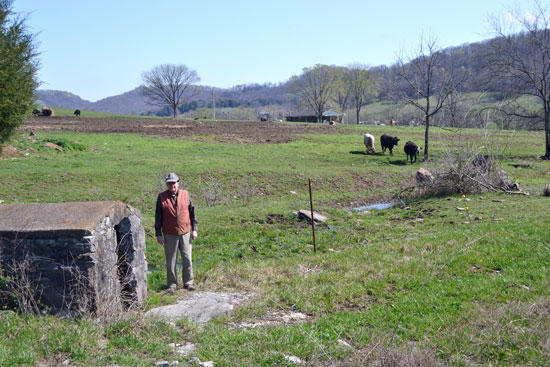 Eddie Nichols stands at the Beverly Willard Spring on Hurricane Creek. Beverly Willard was one of the first settlers of this area of Cannon County.
The Auburntown Historical Society (AHS) met for their first meeting of the year on Thursday evening February 16, 2012. President, Mary Hughes welcomed the group and after a short business meeting, introduced the guest speaker Eddie Nichols, a life long resident of Auburntown in Cannon County. A transcript of his presentation follows:

In the year 1789, my ggggg grandfather, on my mother’s side, purchased 294 acres of land from Edmund Payne. His name was Beverly Willard and he obtained this land in Pittsylvania County Virginia.

By 1800, Beverly had become dissatisfied and had sold his Virginia land and was making plans to migrate to Tennessee. By 1803, he had acquired land from land speculator George Michie. These 120 acres of land were in the newly formed Wilson County of TN. Its location was described as being upon the waters of Hurricane Creek, a fork of Sanders Fork that was a fork of Smith Fork.

No one in 2010 knew where Beverly’s land was located on Hurricane Creek. My brother Danny was about to publish a book on Willard family history. He thought it would be good for his book if we could place the Willard property. He asked my help and this began a five month search for our ancestor: Beverly Willard.

My uncle Frank Willard and Danny had already reviewed and copied deeds and wills of our Willard ancestors at the Wilson County Courthouse in Lebanon. Although Cannon County was established in 1836, some areas including Auburntown, Hurricane Creek, Sycamore, and Marshall Creek remained a portion of Wilson County until 1838.

None of the information in the early Wilson County deeds provided a specific landmark to locate Willard lands. However, I was able to draw plats of their properties from the deed descriptions. I learned the early surveyors used a system of surveying called the Rectangular System. Simple – all lines run north and south, east to west, and distances are measured in poles – a pole being 16 1/2 feet.

I started viewing land on Hurricane Creek using the computer Map Quest aerial view. A north to south fence row was visible on the west side of the old McAdoo place owned by Ronald Dowdy today. On this land, is located a spring referred to in several old property deeds as the Big Spring. It was a community attraction and was later called the McAdoo Spring. A lane and road traveled from it eastward past the McAdoo Cemetery and across the hill to Sycamore Creek. This area looked good for a Willard placement but no identifiable landmark connected to a Willard could be found for proof.

Needing a known landmark, led us to review deeds in Woodbury at the Cannon County Courthouse dated after 1836. Danny and my wife Donna photographed the old deeds and placed them on the computer where enhanced images made reading them much easier. It became my job to read and interpret these deeds from about 1836 to the 1880’s.

The first important deed found was Nelson Owen to Fountain Owen in 1842 for 140 acres. This deed mentioned Beverly’s fence and Willard’s spring. It gave a description of two acres of land in a third track being transferred with the spring.

Next was an 1861 deed of 12 1/2 acres being conveyed from J.D. Owen to C.C. Odom. This deed made the statement: “The spring known as the John Willard’s” and gave the number of poles from it to the main Hurricane Creek. Here, finally was an identifiable land mark if it could be found. I knew most of the springs on Hurricane Creek and by estimating distances of their location on Map Quest, I was able to locate one that could be Willard’s spring. It was located on the old Cantrell Bethel Odom place now owned by Randy Toombs. Randy gave Donna and me permission to examine his spring and using a 16 1/2 foot chain, we measured the exact distance from the spring to the main creek as specified in the 1861 deed. When we got to the creek and counted the number of marks for each pole, we were quiet elated that the distance was 37 poles or 610 feet, the exact distance as recorded in the 1861 deed.

We had hoped the McAdoo property and spring had belonged to Beverly but as it turned out this was not the case. However, William McAdoo was Beverly’s next door neighbor and the executor of his estate. I feel Beverly and many members of his family are buried in the McAdoo Cemetery which is on property owned today by Bobby Dutton.

I’ve stated Beverly Willard was from Virginia. He had been in TN nearly ten years when the James W. Odom family moved from North Carolina to TN. They too began acquiring land around Auburntown and Hurricane Creek. Unlike the Willards this Odom family came with money and slaves. This advantage combined with the destruction of the Civil War, almost squeezed the Willards out of Cannon County.

James Odom had ten children. Two of the most enterprising were William C. Odom and Benjamin Franklin Odom. William C. Odom and one of his sons, Cantrell Bethel Odom, acquired most of the Willard land including Beverly’s sons James and John’s entered land.

Danny and I trace our linage from Beverly’s son John to his son William. William’s first wife was Lovey Duggin. They had six children. Lovey died and William married Tilitha Summar and they had twelve children. This made William the father of eighteen. In 1870, William and most of these children left TN. They traveled in a wagon train of 30 wagons consisting of Cannon County families bound for Freestone County, Texas. This move to Texas could have kept Danny and I from being here tonight except for one little thing. Matthew Wiseman Willard, a son of William, was sweet on one of Cantrell Bethel Odom’s daughters, Drucilla T. Odom. Matt made a fast trip back to TN and he and Drucilla were married in 1871. They made their home on the Auburntown side of Milton Hill. Over the years, Matt made eleven round trips by horse back to Texas to visit relatives. The distance one way was about 800 miles.

One of Matt’s sons, William Gus Willard, was the father of my mother, Mattie Drue Willard Nichols. They lived where Jewell Dale and Robert Patterson own today. My mother Mattie Drue and my daughter Sara Drue (named after her grandmother), bear the family namesake of Drucilla Odom.

Benjamin managed to father more children than William Willard: nine by his first wife, and ten by his second. Benjamin’s life was cut short in 1881 when he was killed by his son-in-law, Vance Wilson who had married two of Benjamin’s daughters.

Donna and I live on a 180 acre hillside farm that once belonged to Benjamin Franklin (B.F.) Odom. I have collected 33 axes; many plow points, and horse shoes which would have been used in the taming of this land. Both Benjamin and his nephew, Cantrell Bethel Odom are buried in the upper left hand corner of the Odom Cemetery on Sanders Fork. The land for this cemetery was donated by B. F. Odom upon the death of his first wife, Mary Higgins.