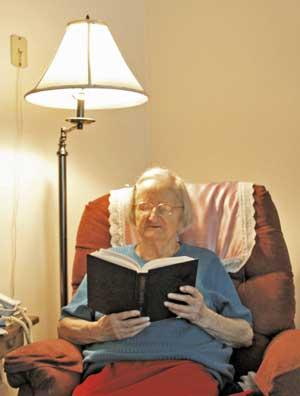 Mrs. Gladys Whyte Holt enjoys reading in her apartment at the Holiday House. (Photo by SEAN PARKER)
The Holiday House on Dillon St. in Woodbury is home to many of Cannon County’s most experienced residents. There they enjoy independent living with support for their specific needs. Two of their oldest residents, Gladys Whyte Holt and Blanche Wise, turned 98 this year. Both ladies continue to live strong, productive, Christian lives and the examples they set are quite uplifting.

Gladys Whyte Holt was born on May 21st, 1911. The seventh of 10 children, she fondly recalls her early days in the Burt Community of Cannon County.

“We didn’t think we were poor, we had plenty to eat, plenty of cows to milk,” she says. “I like to go back every chance I get.”

Mrs. Holt has spent nearly all of her life in Cannon County, except for a brief period with her daughter in Washington state after her husband passed. She is happy to have lived the life she’s been blessed with and her warm pride shines through when she speaks of her most important project -- her children.

Mrs. Holt has spent the last 25 years at Holiday House. “It’s a good place. Woodbury is a nice community,” she says.

Most of her time is spent reading magazines and books, many of them have been sent by her children. Though no longer able to regularly attend any of the nearby churches, Mrs. Holt is still able to worship each week.

“We have church services from the Woodbury Church of Christ each Sunday morning and every Tuesday two preachers come down and we have Bible class.”

Blanche Wise has lived a similarly blessed life to Mrs. Holt. Born in August of 1911 in Cannon County, she moved around age 12 to Chattanooga and later to Washington D.C.

A hard-working woman, Mrs. Wise has been employed all of her life raising children, in the church, the school system, or her primary career at the Bank of Washington.

Sadly, Mrs. Wise is no stranger to loss.

“I’ve had heartaches, of course. Everybody has them.”

Both of her children have passed away. Still she carries an adamantine resolve to be thankful for the life she’s had. She recalls the recent loss of her canine companion whom she inherited from her daughter:

“When she passed away she said to me, ‘Mother, who’s going to take care of Charlie?’ Charlie was about ten years old then. I had him for a little over five years, and he went blind then. He was doing well until he lost the use of his little back legs, so I took him to the vet and had him put down.”

She smiles tearily, “you won’t guess what I did with his ashes. I had him cremated and I took his ashes down to the cemetery and dug a little hole right where my daughter’s hand would have been ... So she got Charlie back.”

Even in the midst of such a heartfelt story, Mrs. Wise moves to the good side.

“I’ve had more pretty flowers given to me... the ladies here in the building and from grandkids and such.”

When asked the secret of her longevity, Mrs. Wise says she never smoked, never drank, and was always careful what she ate. Her positive outlook and genuine love for life have undoubtedly been a factor as well.