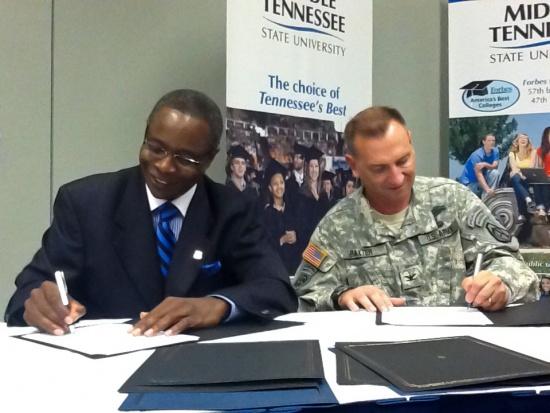 Sidney A. McPhee (left), president of Middle Tennessee State University in Murfreesboro, and Army Col. Timothy Baxter, project manager for the Army's Unmanned Aircraft Systems office, sign an agreement to share training and resources in the use of drone aircraft technology. The signing took place in Washington, D.C., at the annual gathering of the Association for Unmanned Vehicle Systems International.

WASHINGTON, D.C. — Middle Tennessee State University unveiled a one-of-a-kind partnership with the U.S. Army Thursday that further solidifies its reputation as a premier spot in the nation for the study of unmanned aerial systems.

The memorandum of understanding between the MTSU UAS program, part of the Murfreesboro, Tenn.-based university’s Department of Aerospace, and the Army’s UAS Program Office was announced as part of the Association for Unmanned Vehicle Systems International conference in Washington, D.C.

The Army is partnering with MTSU to turn university-level research and development into technology applicable to UAS. As part of the exchange, the Army pledged to support MTSU’s UAS educational and research efforts; MTSU will receive three hand-launched, remote-controlled AeroVironment RQ-11 Raven aircraft and two control stations from the Army later this fall.

The University simultaneously announced plans for a Center for Unmanned Systems Operational Advancement and Research at MTSU, to be known as MT-CUSOAR. The new center will provide a collaborative environment for academic, industry and government entities to advance UAS operations and technology integration.

The pact is the first signed between a university and the Army UAS Program Office, which operates the largest unmanned fleet in America. Although the Army works with other universities on a contract basis, the collaboration with MTSU is unprecedented.

“We are proud and pleased to enter into this innovative partnership with the Army in the exploration and development of UAS technology and training,” said President Sidney A. McPhee, who joined Army officials in Washington for the announcement.

“For more than six decades, MTSU has been on the leading edge of aerospace education,” McPhee added. “This agreement is another in a series of bold steps forward that we’ve taken to provide the very best in facilities, training and service in this important area.”

“This agreement will serve the educational needs of a growing industry and a growing program in the Army,” noted Col. Timothy Baxter, project manager for the Army UAS Program Office. “We are committed to this program’s success, which will help to accelerate the technological advances we seek in Army UAS programs.”

Unmanned aircraft, or “drones,” are demanding more attention in the aviation community. In addition to combat, unmanned aircraft potentially can be used to patrol domestic skies, survey land and crops, monitor forest fires and environmental conditions and perhaps even move cargo from city to city.

MTSU’s rapid expansion into the unmanned arena tracks industry growth. Tim Owings, the Army’s deputy program manager for UAS, said the Army was doing between $100 million and $150 million worth of work in unmanned aircraft systems around Sept. 11, 2001; today, that figure is about $2.5 billion.

Officials said MTSU was a particularly good fit for the Army given its burgeoning unmanned program as well as its location in the southeastern United States, which is the primary recruiting base for Redstone Arsenal in Huntsville, Ala.

“To the degree that the Army can promote independent research and development at the university level, develop student interest in what the Army does in UAS and then ultimately hire many of these students, this is a win-win situation from the Army perspective,” Owings said.

MTSU Aerospace Chair Wayne Dornan said the agreement is “another major step” in building “the best UAS research and educational program in the United States.”

Kyle Snyder, director for MTSU’s Unmanned Aircraft Systems Operations, said the aerospace department also is developing a curriculum for a bachelor’s degree in aerospace with a concentration in UAS operations.

“The UAS Operations curriculum will prepare graduates to lead UAS flight programs for civilian markets ranging from law enforcement to agriculture applications,” Snyder said. “A combination of academic coursework, field experiences and industry internships will prime graduates of the UAS Operations program to launch careers in the fast-growing world of UAS.”

The new agreement adds to MTSU’s momentum in UAS study and research. A spring 2011 partnership with UAS leader ISR Group of Savannah, Tenn., is giving the University an increasingly stronger foothold in UAS development. MTSU also is working with the Federal Aviation Administration in its sweeping overhaul of the national airspace system through the Next Generation Air Transportation program as part of a 33-member, $1.4 billion team led by ITT Corp.