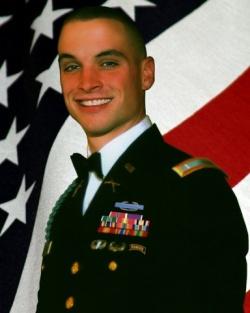 Lt. Walkup was serving as a platoon leader in Rashaad, Iraq when an improvised explosive device detonated near his position. The 2005 UT Sociology graduate was assigned to the 25th Infantry Division and was an Airborne, Air Assault, and Ranger school graduate. What started as a remembrance to Lt. Walkup, the event has now grown into a tribute which honors all fallen American heroes.

Alongside the memorial march, The Road March for Warriors will conduct a motorcycle rally in order to show their support for the event embodying the event motto “Honor the Past, Support the Future.” These veterans serve as the liaison between the Gold Star Mothers and The University of Tennessee Rockytop Battalion. (www.roadmarchforwarriors.com)

The American Gold Star Mothers, Inc is an organization of mothers who have lost a son or daughter in the service of our country. Each mother will be recognized in the opening ceremony by presenting a Gold Star Flag to a team marching in honor of the fallen service member. The team will carry the flag and will return it to the mother at the completion of the march; symbolizing “Honor through Action.” This event has become the largest Gold Star Mother recognition ceremony in the southeast and is gaining national recognition.

Mountain Man Memorial March benefits the Wounded Warrior Project in Lt. Walkup’s name by donating 20 percent of all proceeds and 100 percent of all on-site collections on the day of the event.

The event is a marathon length march or run through the scenic Smokey Mountains and Gatlinburg Tennessee. There will be quarter (6.25 mi) half (13.1 mi) and full (26.2 mi) length routes in each of the heavy and light divisions. Past participants have ranged from active duty service members to civilians.

Raised in Woodbury, Frank B. Walkup, IV, always wanted to be like his father and serve in the Army. Upon his graduation from the University of Tennessee in 2005, Frank was commissioned as a second lieutenant in the Infantry. A graduate of Airborne, Air Assault, and Ranger School, Walkup was assigned to the 25th Infantry Division in Hawaii.

In the summer of 2006 he was deployed to Iraq as a platoon leader. He was killed on 16 June 2007 in Rashaad, Iraq, by an improvised explosive device that detonated near his position during a dismounted patrol. He is survived by his parents, nine brothers and sisters, and his college sweetheart, Sabita Walkup.

He will always be remembered by those who knew him. Not only for his service to country, but more importantly for his friendship.

Inspired by the annual Bataan Memorial Death March in White Sands, N.M., the concept has evolved into a tribute to all service members and draws thousands of participants each year.

The course includes stretches of highway and rural roads in addition to rugged terrain and mountain slopes.