STORY AND PHOTOS BY DONNA NICHOLS 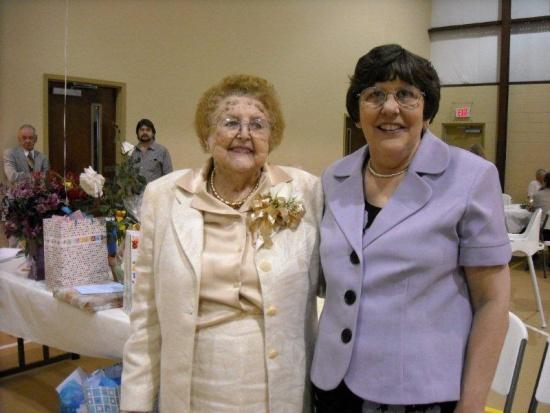 Ms. Mallie (Tate) Taylor and her daughter Rachel Melton of Auburntown stand near the gift table at Ms. Taylor's 100th Birthday Celebration held Sunday, February 21st at Auburn Baptist Church Activity Center. Over 150 guest came to wish her Happy Birthday and share this happy occasion with family and friends. Ms. Mallie Taylor is one of twelve children born to Edgar Tate and Isie Ve Patterson Tate of the Gassaway Community in Cannon County.

“A long, long, long time ago you were born and the world became a better place,” read one of the many greeting cards given to Ms. Mallie Opal (Tate) Taylor at her 100th birthday celebration held Sunday, Feb. 21 at the Auburn Baptist Church Activity Center. More than 150 well-wishers came to help honor Ms. Mallie on her special day.

Ms. Mallie was born on Feb. 22, 1910 at Wilmouth Creek near Gassaway, TN. She was the second of twelve children born to Edgar Tate and Isie Ve Patterson Tate. At ten months of age, her family moved to Pleasant Ridge community. When she was old enough to start to school, she and her oldest brother Roy stayed with their paternal grandmother Melissa Azaline Tate. Ms. Melissa lived only ½ mile from Rabbit Bluff School which made the walk to school easier. Their school building was located at the intersection of Wilmouth Creek and Turkey Branch roads. It was a one-room schoolhouse where Mr. Alex Tassey taught first through eight grades. Schools were opened only three to four months during the winter when families were not planting or cultivating crops.

During her early childhood, Ms. Mallie was taught to quilt by her grandmother Tate. Any stitch not correctly sewn had to be immediately removed. Sewing lessons served Ms. Mallie well as she has made quilts throughout her lifetime and continues to make six to eight handmade quits a year. After piecing together a quilt top pattern, she pins it with the lining onto the floor. “I get down on my knees to base the quilt top and bottom together,” she explained. A large hoop held in her lap keeps sections of the quilt taunt for completed stitching.

After finishing the 10th grade at Gassaway School, Ms. Mallie graduated from high school in Woodbury in 1933. She remained at home until 1935 when she moved to Murfreesboro and attended Middle TN State Teachers College. After completing one quarter of secondary education, she returned to Cannon County and taught school earning $390.00 per year in wages. She returned to college in 1936 and completed a second term. However, instead of returning to the classroom, she obtained a factory job in Nashville.

Ms. Mallie sought employment at Mays Hosiery Mill owned by three brothers from Gassaway: Walton, Walker and Rudoff Kinlaw. Her sister Callie Lee Tate was already working at the mill. The day she arrived, there was a huge room full of people hoping to find work. Walton Kinlaw walked over to where she was seated and whispered in her ear, “Do not leave.” A short time later an announcement was made that the mill was not hiring anyone on that day. “Everyone left but I stayed,” she said gleefully, “and I got the job!” She more than doubled her teaching salary by earning $962.00 a year inspecting new socks. She worked at Mays Hosiery Mill for a couple years before joining her brother Palmer & wife Earnestine Tate in Detroit Michigan. She worked a while in the automobile industry at $1.50 an hour. She returned to Cannon County in 1941, after her brother’s company transferred him to Key West, Florida.

By 1942, Ms. Mallie lived in Nashville and worked at Vultee Aircraft. Her job included sharpening all types of tools used in construction of airplanes. In 1943, while riding a bus home to Cannon County, she met a U.S. Army solider named William Currie Taylor. He was in route to visit relatives in North Carolina before military deployment overseas. They exchanged addresses and corresponded during World War 2. William served in active combat witnessing several comrades killed in action. After an honorable discharge in 1944, he was hospitalized for battle fatigue. When William was released from the VA hospital, he and Ms. Mallie were married on April 4, 1944, and they moved to his hometown of Kannapolis, North Carolina.

Both William and Ms. Mallie worked in the cotton mills of North Carolina until she began her family. Their first child J.T. died in 1945 at premature birth. Other children born in NC were Randall 8-1-1946, Rachel 9-9-1947, and Wayne 11-30-1948. The family moved to Wilson County in Lebanon, TN in the early 1950’s where daughter Darlene was born on 7-18-1952. Mr. Taylor farmed and share cropped after the family moved to TN. He died suddenly on 8/27/1952. After her husbands’ death, Ms. Mallie and her four small children moved into a rent house owned by her father Edgar Tate in Gassaway, TN.

Ms. Mallie said that Psalms 91 has given her confidence and assurance through many difficult times. Her Bible is worn from reading the promises of refuge and deliverance. Her trust in God and support of family and friends sustained her as a single parent. She supported herself and children by quilting, baby sitting, raising tobacco, and a small Social Security check. She obtained a widow’s pension a few years later from the VA.

In 1958, she moved to the Kennedy Creek area of Auburntown. She purchased the former James’ Stevens property containing a house and 191 acres. She still lives there and older son Randall’s home is near-by. Ms. Mallie has eight grandchildren and six great grandchildren. She has a host of nieces and nephews and one surviving sibling, 88 year old Shelby Mae Vickers of Woodbury. Her health is good after a slight heart attack about six months ago. She said that one of her hip joints was “about worn out” but she gets up and down easier than some seniors half her age. She has undergone cataract surgery for both eyes; however, she can still see well enough to quilt, cook, and watch TV.

Ms. Mallie Opal (Tate) Taylor was joyful as she met her friends and family members who came to wish her, “Happy 100th Birthday!” She wore one-inch high heels while standing for more than two hours greeting folks and reminiscing. Her mind is clear with excellent memory and recall. Her constant smile and sparkling blue eyes are a testament to her appreciation of life. Ms. Mallie attributes her long life to hard work, a loving family and her faith in God. “I think that I am going to live at least a couple more years,” she laughed. Ms. Mallie is an amazing individual and she refers to herself as a “miracle.”

Print
Members Opinions:
Straitupmarilyn
[Delete]
Happy Birthday to an awesome lady. Girl you lived your life to be a blessing to others. What it tells me, if you do what is right, God will truly reward you with long life. God bless you mother. Enjoy your day. I'm sure you can teach some of us young people a thing or two. (smile)